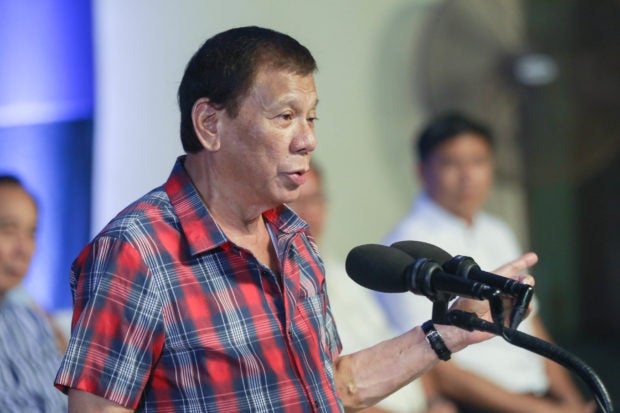 MANILA, Philippines — President Rodrigo Duterte has vowed to expedite the implementation of the agrarian reform program but promised that he will do so under due process of law.

The President made the pledge in Pigcawayan, North Cotabato on Friday as the led the distribution of P58 million worth of agricultural assistance to farmers in the Cotabato region.

“If there are any lands left available for land reform, I will strive to include these in land reform. You owners of huge lands, although there is no more land reform, if you don”t let go of these lands, I will force you to give it,” he said.

“But I will not force it because I want to become a dictator. I won”t move without the rule of law. So the police and military, take comfort when I say ‘do it’ because I will never order you to do an illegal act,” Duterte added.

Aside from P 58 million worth of farm equipment, including tractors, rice harvesters, hand tractors and fertilizers, the President also distributed Rice Farmers Financial Assistance cash cards, each with P 5,000, to farmers of Libungan, Cotabato.

The Duterte administration recently said it has distributed 120,889 hectares of land under the agrarian reform progam to 77,275 beneficiaries. This is out of the 613,327 hectares of land pending for distribution in July 2016.

“Let me assure you that the government will maintain regular consultations with your sector in order to determine your needs,” he said.

He added: “We will invest in much-needed infrastructure such as farm-to-market roads, irrigation systems, farm equipment and other tools which are aimed to increase rice productivity.”

The President assured farmers that the government is committed to ensuring food security and the welfare of farmers.

“It is my hope that farm inputs and machineries to be distributed today will reinforce the short and long term solutions that we have already implemented that aim to raise greater productivity and competitiveness in the sector,” he said.

He added that he already has an idea about the person responsible for the distribution of faulty farm equipment to farmers. He did not name the person but joked about killing him instead.

“I”m not pointing fingers at anyone but whoever bought that for you, truly a shameless person. I already have a person in mind. I said, I will just kill this fool,” Mr. Duterte said.

According to Department of Agrarian Reform Undersecretary Luis Pangulayan, the distribution of land under agrarian reform is at 20 percent mainly because of the resistance of landowners.”””

The Presidential Agrarian Reform Council, which was in hiatus from 2006 to 2016, also failed to complete a land acquisition and distribution master plan that was supposed to hasten the distribution of distributable land.

“Private agricultural lands (PALs) occupy the last rung in the implementation ladder. PALs are difficult to cover due to the resistance of landowners,”Pangulayan said in an article in the Inquirer.