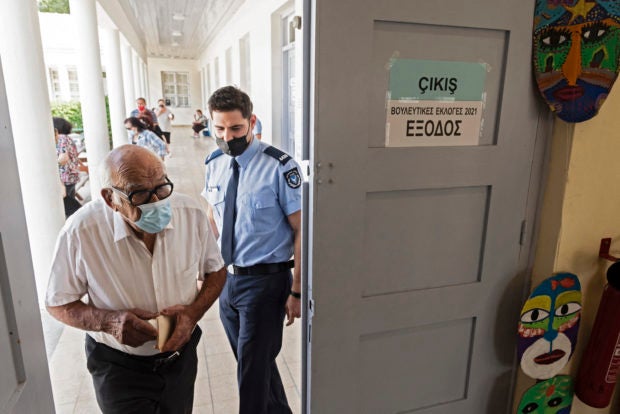 A Cypriot man arrives to cast his ballot at a polling station in the capital Nicosia during voting on May 30, 2021 in parliamentary elections amid simmering public anger over the “golden passports” corruption scandal on the Mediterranean island. AFP

Lawmakers voted for a non-binding bill against the method of granting citizenship on financial grounds with a large majority in Strasbourg.

Opponents of golden passports — which exist in Malta, Cyprus and Bulgaria — said they were “unacceptable on ethical, legal and economic grounds” and “undermine the very essence of European citizenship”.

MEPs also demanded EU-wide rules on “golden visas”, which grant residence permits on the same principle and can be obtained in 12 member states, according to the European Parliament.

Russians in particular benefit from these systems. The European Parliament asked member states to immediately exclude Russian applications and review those approved in recent years.

The controversial practice is suspected of facilitating corruption and money laundering. Brussels launched disciplinary proceedings against Cyprus and Malta in 2020 without going further.

Malta last week said it would suspend granting “golden passports” to Russians and Belarusians until further notice following the invasion of Ukraine.

Earlier this week, EU justice commissioner Didier Reynders said the European Commission — the bloc’s executive body — “fully shared” the objective of abolishing such programmes in all member states as soon as possible.