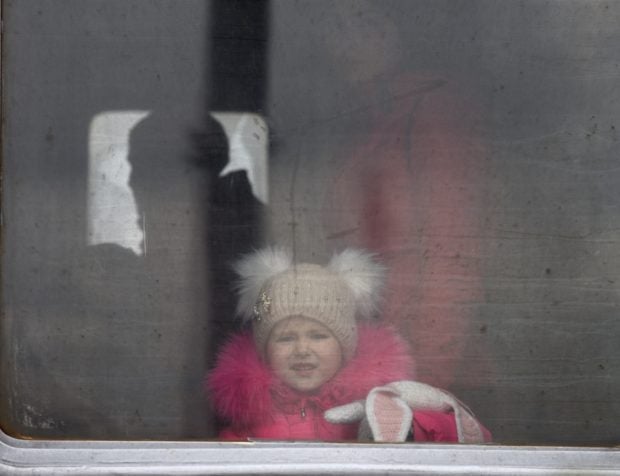 A child looks through the window of a carriage of an evacuees’ train from eastern Ukraine upon the arrival at the railway station in the western Ukrainian city of Lviv on March 8, 2022. AFP

KYIV — International leaders and Ukraine accused Russia of a “barbaric” attack on a children’s hospital in the besieged city of Mariupol, as civilians continued to bear the brunt of the conflict two weeks into Moscow’s invasion.

Ukrainian President Volodymyr Zelensky said 35,000 civilians had managed to flee cities under Russian attack on Wednesday, but there was little relief in Mariupol where the mayor said relentless bombardment had killed over 1,200 civilians in the nine-day siege.

A local official said the attack wounded at least 17 staff, though no deaths were immediately reported. Zelensky said the “direct strike by Russian troops” had left children under the wreckage.

Russia’s foreign ministry did not deny the attack but accused Ukrainian “nationalist battalions” of using the hospital to set up firing positions after moving out staff and patients.

Video shared from the site by rescue workers showed a scene of complete devastation, with the wounded being evacuated, some on stretchers, past charred and burning carcasses of cars and a massive crater by the building.

Inside, debris, shattered glass and splintered wood littered corridors, administrative offices and bedrooms, with mattresses thrown from their frames.

The White House slammed the “barbaric” use of force against civilians, while British Prime Minister Boris Johnson called the attack “depraved”.

A UN spokesman said no health facility “should ever be a target”.

The attack came as women were in labor inside, the regional military administration in Donetsk told AFP.

US warns Russia may use biological weapons in Ukraine