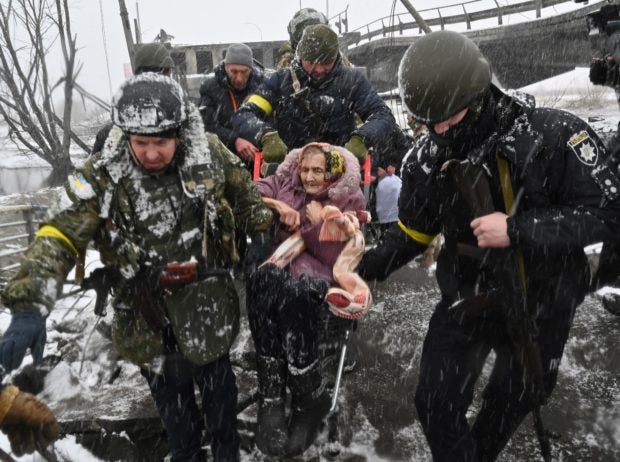 Ukrainian soldiers help an elderly woman to cross a destroyed bridge as she evacuates the city of Irpin, northwest of Kyiv, on March 8, 2022. AFP

LONDON — Millions of elderly and disabled Ukrainians are “at high risk” as they are unable to flee the fighting, the UK Disasters Emergency Committee alliance of leading aid charities warned Thursday.

More than two million people have already fled Russia’s military assault and “older people and those with disabilities in Ukraine risk being left behind and urgently need protection and assistance,” the DEC said.

There are more than seven million people aged 60 or more in Ukraine and 2.7 million people with disabilities, according to the European Disability Forum.

“Many cannot escape from affected areas nor seek shelter from bombings due to lack of mobility. They are also at risk of violence and neglect,” said the DEC, which represents the British Red Cross and 14 other groups.

Age International director Chris Roles said that many of the elderly and disabled “may be housebound or unable to walk without support”.

“Many older people will be completely alone, isolated and frightened. Some can’t make the long arduous journey out of the country because their health is bad,” Roles said.

A survey of the eastern Donbas region, where fighting has been going on in places since 2014, indicated that more than 90 percent of the elderly there need help to get food and cannot heat their homes in freezing conditions.

More than a third of older people are in urgent need of medication for chronic diseases, and three-quarters need hygiene items such as toothpaste, soap and toilet paper.

The DEC’s humanitarian appeal for Ukraine has collected more than £120 million ($159 million, 144 million euros) since it was launched last week, including an unspecified “generous” donation from Queen Elizabeth II.

US warns Russia may use biological weapons in Ukraine