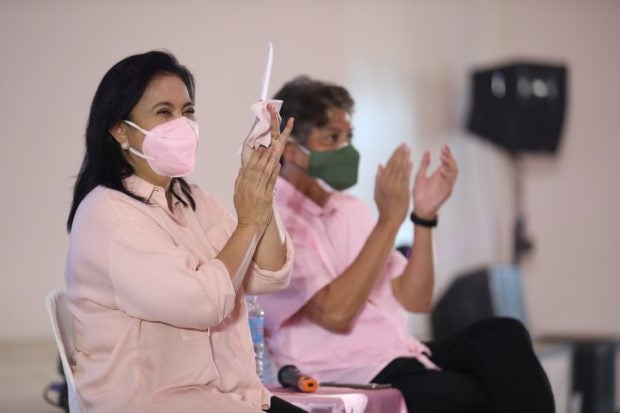 Vice President Leni Robredo also met with groups from various sectors supporting her presidential bid during a people’s assembly and consultation event, held at the Acacia Hotel Bacolod in Bacolod City, Negros Occidental on Friday, Nov. 5, 2021. Here, VP Leni took the opportunity to listen to the concerns of each sector, as well as their commitment of support for her, and shared how she intends to address them if elected in 2022. (Photo by Jay Ganzon / OVP)

BACOLOD CITY––Security has been tightened for the “Pink Grand Rally” on Friday, March 11, of Vice President Leni Robredo and her slate.

Augmentation forces from the Police Provincial Command and the Bacolod Traffic Authority Office will ensure peace and order in areas surrounding the Paglaum Stadium, where tens of thousands of Robredo supporters are expected to attend the grand rally, the Laban Leni Negros Occidental (LLNO) organizers said.

LLNO, who organized the grand rally, released the event map on Wednesday to guide the people on where to go, particularly the elderly and persons with disabilities, who will have a seated designated area. They are required to bring their identification cards and allowed one companion only.

All gates will open at 2 p.m., but road closure of Lacson and Hernaez streets surrounding the stadium will be closed by 8 a.m. until the event is over. Except for Gate 7, which will be for the exclusive use of the elderly, PWDs, and the media, all gates will be open to the general public.

There are no reserved seats in all areas. It will be on a first-come, first-served basis only.

LLNO established 12 medics areas that will be manned by Doctors for Leni volunteers, with eight ambulances situated in various locations around the stadium. Water and food stalls will also be available, but the organizers urge the public to bring their water and food as mobility might be difficult once the stadium is filled with supporters.

The program starts at 3:30 p.m. and is expected to last for seven hours. Volunteer celebrities and entertainers, including Rivermaya and homegrown talents––Joel Torre and Kuh Ledesma––are expected to attend. The MassKara dancers and several groups of drumbeaters will also present numbers.

LLNO urges supporters to wear pink and bring pink stars and other paraphernalia. Only posters and colors of Robredo and her team will be allowed inside the complex.