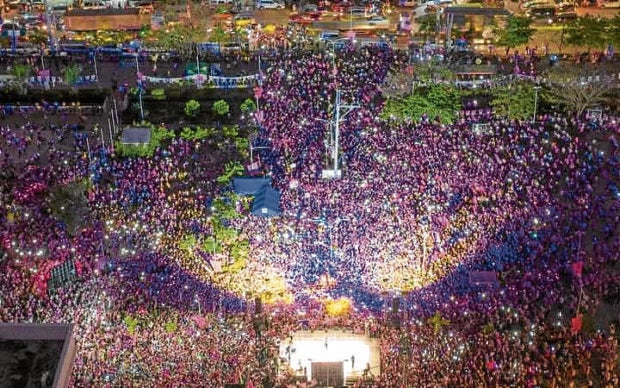 CITY OF MALOLOS, Bulacan, Philippines — Roads in this capital city of Bulacan province were locked in a traffic gridlock for hours on Saturday, as an estimated crowd of 45,000 people trooped to the open ground of the Malolos City Hall for the grand rally here of presidential aspirant Vice President Leni Robredo and her running mate, Sen. Francis “Kiko” Pangilinan.

Gladys Sta. Rita, Robredo People’s Council Bulacan convener, said they had hoped to get a crowd of at most 25,000 and were amazed and overwhelmed when the number almost doubled, as about 45,000 Bulacan residents and people from adjacent areas in Metro Manila and Pampanga province came to the event.

Hundreds of vehicles of Leni-Kiko supporters, decked in their campaign color of pink, flooded MacArthur Highway, particularly along the main 1-kilometer stretch from Capitol Forest Park to the City Hall, Ople Road going to Hagonoy, BSU Road and the Guinhawa-Mojon area. Kilometers-long traffic also extended going to Longos and to Dakila road sections of MacArthur Highway

Supporters of the Leni-Kiko tandem started to gather at Forest Park as early as 11 a.m., packing the 3-hectare grounds of the City Hall even before the rally’s scheduled to start at 5 p.m.

At the provincial capitol building, which is about a kilometer from the City Hall grounds, Robredo and Pangilinan — while waiting on Saturday afternoon for their scheduled arrival at the rally site — were offered Bulacan-made assorted “kakanin” (Filipino snacks) and “ensaymada” as a welcome treat from Gov. Daniel Fernando, who hosted the tandem along with his with vice gubernatorial running mate Provincial Board Member Alex Castro, reelectionist Sen. Joel Villanueva and former City of Malolos Mayor Danilo Domingo, who is running for the congressional seat at the first district.

Fernando, however, would not formally declare if he was supporting the Leni-Kiko tandem. Fernando and Castro belong to National Unity Party, which has yet to announce its presidential candidate for the May elections.

Robredo and Pangilinan first visited the City of San Jose del Monte and Bocaue on Saturday morning before heading for Malolos.

At the grand rally, women volunteers from Obando town famous for its fertility rites and dances, performed under the heat of the sun clad in pink saya (long skirts).

Hundreds of young people of Bulacan belonging to the Youth for Leni-Kiko volunteer group also took part in the rally.

“We are here to take part in charting our own future,” said Jason Anchores, the province’s convener of Youth for Leni-Kiko.