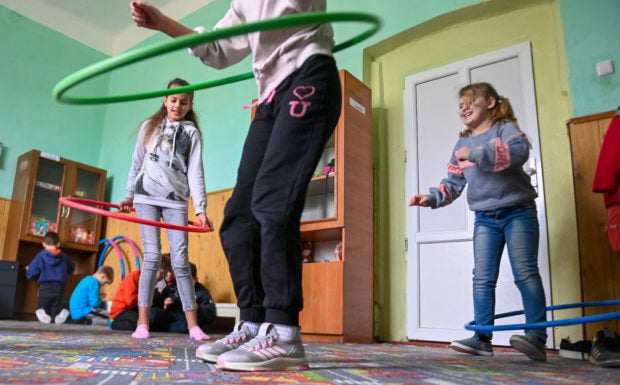 Children play with hoops in a class room in a school in Perekhrestya, close to the Ukrainian-Hungarian border on March 7, 2022, a refuge for 93 orphaned children evacuated from the Artek childrens camp near Kyiv a few days ago due to the Russian invasion. -AFP

“We need to be aware that there are people, criminals, that could try to use this situation,” EU home affairs commissioner Ylva Johansson told the European Parliament in Strasbourg.

“There’s a huge risk of unaccompanied children being victims of trafficking.”

The United Nations said Tuesday that two million people have now fled Ukraine since Russia launched its invasion less than two weeks ago.

The EU has for the first time triggered its protection mechanism granting the refugees crossing over its border the right to stay and work in the bloc.

The vast majority of those arriving are women and children as men are called up for military service.

“We need to do more to protect the children,” Johansson said.

On Sunday, Slovak police said an 11-year-old Ukrainian boy crossed the border into EU member Slovakia with just a plastic bag, a passport and a telephone number written on his hand.

Read Next
Duterte names PDP-Laban faction exec as acting Cabinet secretary
EDITORS' PICK
Do all the things you do, faster
Motorcycles, smartphones, and cash prizes up for grabs in TNT’s ‘Tuloy Ang Saya’ Raffle in Mindanao
House energy committee chair Arroyo bats for cheap electricity
NCR at increased COVID risk again
New PS-DBM director says DepEd laptop MOA ‘not legal’
House okays budget; ways to go in Senate
MOST READ
Robredo’s tarpaulin portrait at Palace just a ‘placeholder’
Shopee PH gets flak for getting Toni Gonzaga
Robredo supporter tackles elephant in room: No massive fraud in 2022 polls, surveys were just right
DepEd: We are in a crisis situation in education sector
Don't miss out on the latest news and information.