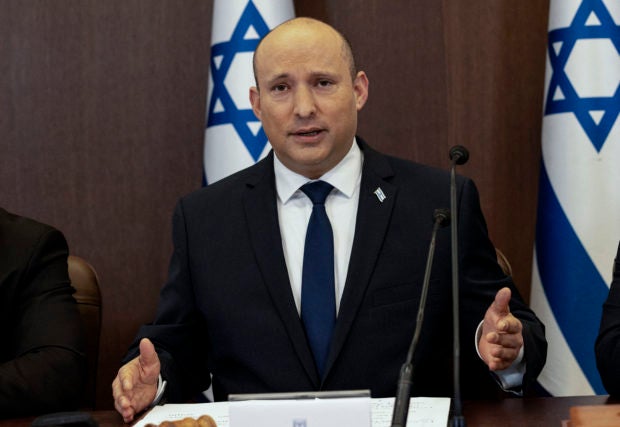 JERUSALEM — Israel’s premier said Sunday his country had a “moral obligation” to help stem fighting in Ukraine, after shuttle diplomacy saw him visit the Kremlin and as hundreds of Jewish Ukrainians landed in Israel.

Speaking Sunday before his weekly cabinet meeting, Bennett said Israel would press on with diplomatic efforts “as needed”.

“Even if the chance is not great — as soon as there is even a small opening, and we have access to all sides and the capability — I see this as our moral obligation to make every effort,” he said.

Bennett has been walking a cautious line on the Ukraine war, seeking to preserve delicate security cooperation with Russia, which has a large military presence in Israel’s northern neighbour, Syria.

Without providing details, the Israeli premier’s office said Bennett spoke over the phone on Sunday with Scholz, French President Emmanuel Macron and also with Putin.

The Kremlin said the pair had a “thorough exchange of views” and “agreed to stay in touch”.

Bennett has not joined Western powers in forcefully condemning the Russian invasion or providing lethal weapons to Ukraine, instead sending humanitarian aid.

Israel said Sunday it would build a field hospital in Ukraine and transfer generators to Lviv hospital, adding to 100 tonnes of supplies sent last week.

Bennett’s office said he also discussed with Putin on Saturday the fate of Jews in Ukraine and Russia.

Israel’s Interior Minister Ayelet Shaked said Sunday that Israel was preparing for around 100,000 people from both countries to move to Israel, under laws that allow people with verifiable Jewish lineage to become Israeli citizens.

Some 300 Ukrainian Jews landed Sunday in three flights, including 100 orphaned children whom the prime minister greeted at Ben Gurion Airport.

The immigration ministry has offered extended benefits and temporary hotel stays to the newcomers.

Shaked said that since the outbreak of the conflict, 2,034 Ukranian refugees had entered Israel, 90 percent of whom do not qualify for the “law of return” that applies to those with Jewish lineage.

Bennett was the second world leader to sit down with Putin since Russian forces invaded Ukraine on February 24. Pakistan’s Prime Minister Imran Khan visited the Kremlin the day the invasion began, in a long-scheduled trip.

Earlier the same day, Iran and the UN nuclear watchdog said they had agreed an approach for resolving issues crucial to reviving the nuclear pact, from which the US unilaterally withdrew in 2018 and then ramped up sanctions on Tehran.

Those issues centred on questions the International Atomic Energy Agency has about the past presence of nuclear material at undeclared sites in Iran.

Shortly before news of Bennett’s Moscow trip emerged, Russia said it would seek guarantees from the US before it backs a renewed Iran deal, potentially scuppering hopes of an imminent agreement.

Russia is a party to the Iran talks but has itself come under heavy sanctions over its invasion of Ukraine.

Foreign Minister Sergei Lavrov said Russia had requested that the US give it written guarantees that Ukraine-related sanctions “will not in any way harm our rights” to cooperation with Iran under the nuclear deal.

US Secretary of State Antony Blinken on Sunday said the issues were “not in any way linked” and called the demand “irrelevant”.

Israel has made no comment on any connection between Bennett’s Russia-Ukraine diplomacy and efforts by the Jewish state to oppose a new Iran deal.

Israeli Foreign Minister Yair Lapid’s office said he was due to meet Blinken on Monday in the Latvian capital Riga, without providing details.

Bennett on Sunday praised IAEA chief Rafael Grossi for not agreeing “to close the open files” on Iran’s past nuclear activity, as Tehran has demanded.

“The disadvantages of the (Iran nuclear) agreement far outweigh its advantages,” Bennett said.

Nadav Eyal, a commentator in Israel’s Yediot Ahronot newspaper, warned that Bennett had undertaken a “very high-stakes gamble”, and that “if it emerges that Putin only used Bennett and deceived him”, the Israeli premier could face “major political ridicule”.