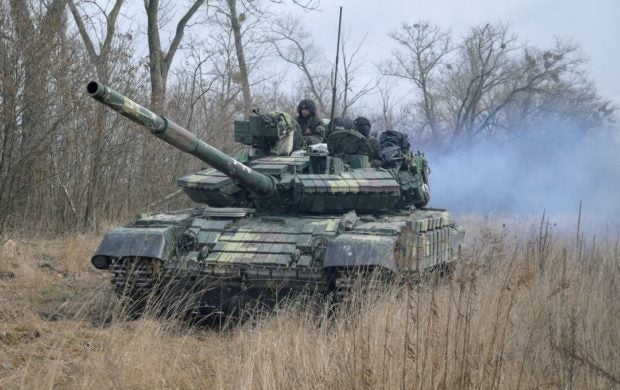 Service members of the Ukrainian armed forces are seen atop of a tank at their positions outside the settlement of Makariv, amid the Russian invasion of Ukraine, near Zhytomyr, Ukraine March 4, 2022. REUTERS

Russian media cited an unnamed source on Sunday as saying that Ukraine was close to building a plutonium-based “dirty bomb” nuclear weapon, although the source cited no evidence.

Russian President Vladimir Putin ordered an invasion of Ukraine on Feb. 24, with the aim to “demilitarize” and “denazify” its pro-Western neighbour and prevent Kyiv from joining Nato.

The West, dismissing that rationale as a pretext, has responded with harsh sanctions on Moscow and heavy military and other aid to Kyiv.

The TASS, RIA and Interfax news agencies quoted “a representative of a competent body” in Russia on Sunday as saying Ukraine was developing nuclear weapons at the destroyed Chernobyl nuclear power plant that was shut down in 2000.

Ukraine’s government has said it had no plans to rejoin the nuclear club, having given up its nuclear arms in 1994 following the break-up of the Soviet Union.

Shortly before the invasion, Putin said in a grievance-filled speech that Ukraine was using Soviet know-how to create its own nuclear weapons, and that this was tantamount to preparation for an attack on Russia.

He cited no evidence for his claim.