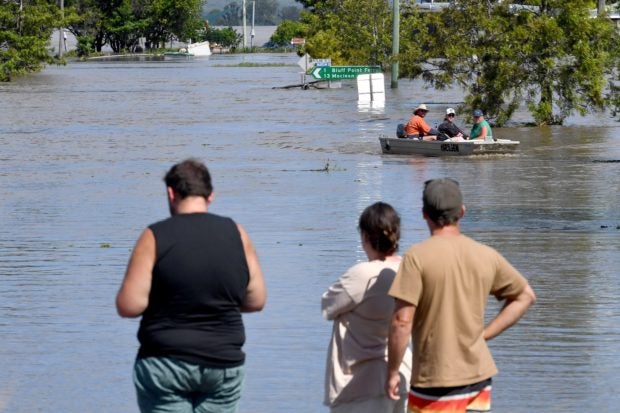 This picture taken on March 2, 2022, shows residents steering their boat through a flooded street in Lawrence, some 70 kms from the New South Wales town of Lismore. AFP

The national weather bureau warned of severe thunderstorms and major flooding in the state of Queensland, where 11 people died in the past week’s floods.

Flash flooding is forecast for the major city of Brisbane, home to 2.6 million people.

Heavy rains, large hailstones and damaging winds were also expected to hit further south in the state of New South Wales, including the town of Lismore, which last week saw record flooding and dramatic rescue efforts to save residents stranded on their roofs.

The death toll from the floods in New South Wales stands at five, after the body of a man was found Saturday.

Some locals in flood-affected areas have taken to social media to vent frustration about what they see as a lack of police, defence personnel and emergency services on the ground to help with the recovery effort.

In Lismore, Tom Wolff, who runs a local charity organisation, said he spent Saturday collecting donations of insulin, which were then delivered by a privately-chartered helicopter to diabetic residents in the nearby town of Woodburn.

Defence Minister Peter Dutton Sunday defended the work of his department in the aftermath of the record flooding, saying he was “absolutely satisfied with the defence response”.

“We’ve come in in force, and we will increase the numbers dramatically,” he said, promising there would be 5,000 troops on the ground in the coming days.