Tearful Ukrainians in Lviv wait for hours to board trains, fleeing Russian attacks 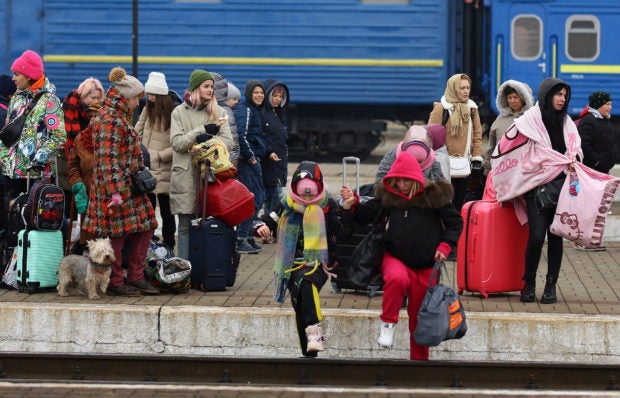 Refugees crossing the rail tracks as they try to reach trains to Poland following Russia’s invasion of Ukraine at the main train station in Lviv, Ukraine, March 4, 2022. (REUTERS)

Thousands of people fleeing the Russian invasion of Ukraine waited for hours on Friday outside the railway station at the western city of Lviv to board trains heading to Poland.

Lviv, some 60 kilometers (40 miles) from the Polish border, has become a transit point for families fleeing fighting in eastern, southern and central Ukraine.

Families arrived with few belongings. Some were in wheelchairs, others accompanied by pet dogs and cats, uncertain about their fate.

“We do not know. We are going to Poland, to the Polish border, and there we will decide, choose a country that takes in refugees,” said Yana Tebyakina. “All we took with us is the bare necessities. A change of clothes. That’s it. All the rest we left behind, all our lives stayed back at home.”

Olena Pasychnik said she had fled from her 16th floor apartment in Kharkiv, about 1,000 km (620 miles) from Lviv, the largest city in Ukraine’s west.

“There was fighting going on and everything could be seen as if on the palm of a hand,” said a tearful Pasychnik, holding her young son. “He starts shaking when he hears the explosions.”

Darina Veselanska, also from Kharkiv, was exhausted after waiting about six hours at the station. “We cannot sleep, we cannot eat normally because of terrible pain… anxious because of everything in this world,” she said.

Lviv, a city of trams and cobblestone streets, has become a staging area for humanitarian aid and soldiers pouring back into Ukraine’s war zone.

Thousands are thought to have died or been wounded as the biggest attack on a European state since World War Two unfolds, creating 1 million refugees according to the United Nations.