Russia at risk of expulsion from Council of Europe – chief 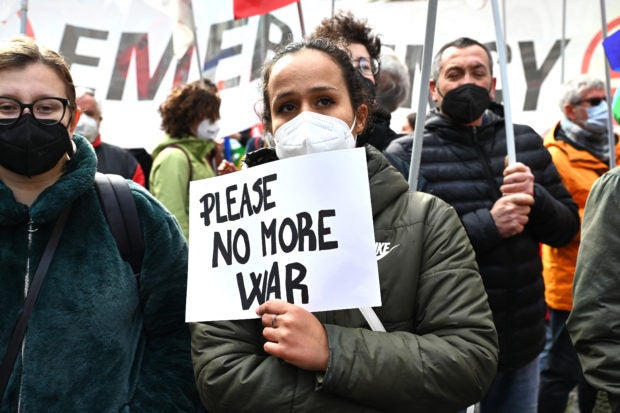 FILE PHOTO: A protester holds a placard reading “Please no more war” during a demonstration, called by associations Italian Peace and Disarmament Network, trade unions Cgil, Cisl, Uil, and other organizations to protest against Russia’s invasion of Ukraine, at Piazza Santi Apostoli in central Rome, on February 26, 2022. (Photo by Andreas SOLARO / AFP)

Strasbourg, France — Pressure is growing among member states for Russia to be expelled from the Council of Europe after it was suspended in the wake of the invasion of Ukraine, the pan-European rights group’s secretary-general said on Friday.

The Council of Europe’s executive body, the committee of ministers, had a day after the invasion on February 25 suspended Russia from all its rights of representation — but an expulsion would be unprecedented.

“Today, more and more voices are demanding that the next step is the expulsion of the Russian Federation,” Marija Pejcinovic Buric told AFP in an interview.

“I call, once again, on the Russian authorities to immediately and unconditionally cease hostilities and to return to diplomacy and dialogue,” she said.

“But if this isn’t the case, the Committee of Ministers and the Parliamentary Assembly (of the Council of Europe, PACE) will move forward, in the direction of an expulsion.”

An expulsion would mean Russians no longer have recourse to the European Court of Human Rights (ECHR), which is part of the Council of Europe.

No member state has ever been expelled from the COE, which was created in 1949 and of which both Russia and Ukraine are members.

Greece, then under military rule, itself walked out of the body before being expelled, a move that Russia could in theory also repeat to avoid the stain of being expelled.

Not using the death penalty is a precondition of COE membership.

She said his comments were “deplorable” and the death penalty was a “red line” for the Council of Europe.

Medvedev had described Russia’s suspension as “a good opportunity to restore a number of important measures to prevent especially serious crimes — such as the death penalty… which is actively used in the US and China.”

Russia has observed a moratorium on the death penalty since 1996 although it has never formally abolished the practice.

A Russian exit would deprive the COE of nearly 7 percent of its annual budget, around 500 million euros ($545 million).

But Buric said she had received “reassuring” signals from several member states, including France and Germany, ready to guarantee the financial sustainability of the organization.

“We always hope that diplomacy will have an effect, but in the meantime, we have to prepare for the worst, and the worst for the body would be expulsion”, she said.

“The Russians, for the moment, leave us no other possibility.”

A plenary session of the PACE, which needs to be consulted before any definitive decision, is due in Strasbourg on March 14 and 15.