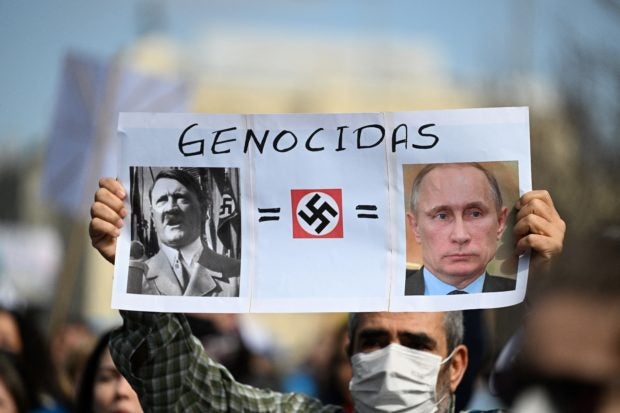 A demonstrator holds a sign depicting Russian President Vladimir Putin and Adolf Hitler reading “Genocide” during a protest against Russia’s invasion of Ukraine in Madrid on February 27, 2022. AFP

THE HAGUE — The International Criminal Court’s chief prosecutor said Wednesday an active probe into possible war crimes in Ukraine “will immediately proceed” after his office received the backing of 39 countries.

“I have notified the ICC Presidency a few moments ago of my decision to immediately proceed with active investigations in the Situation” in Ukraine, Karim Khan wrote in a statement.

“Our work in the collection of evidence has now commenced,” he added.

Khan announced Monday he was opening a probe into alleged war crimes committed after Russia’s invasion of Ukraine last week.

Khan said he believed there was a “reasonable basis” to believe that crimes within the court’s jurisdiction had been committed.

But he needed the Hague-based court’s judges to approve his decision before going ahead.

However, the ICC countries’ referral now means that Khan’s probe can continue without the judges’ approval, speeding up the process.

“These referrals enable my office to proceed with opening an investigation into the situation in Ukraine from 21 November 2013 onwards,” Khan said.

That would include “any past and present allegations of war crimes, crimes against humanity or genocide committed on any part of the territory of Ukraine by any person,” Khan said.

Khan, who was recently appointed as prosecutor, said his probe will be conducted “objectively and independently” and focus on “ensuring accountability for crimes falling within ICC jurisdiction”.

The Hague-based ICC was established in 2002 as an independent court to try individuals accused of genocide, war crimes and crimes against humanity.

The ICC, however, can only prosecute crimes committed on the territory of its 123 member states.

Ukraine is not a member, but in 2014 accepted the jurisdiction of the Court.

Moscow withdrew from the ICC, so the court will only be able to reach Russians if they are arrested on the territory of a state that respects the jurisdiction of the court.

The ICC is also hampered by the fact that it has no police force and relies on state parties to detain suspects — with varying success in the past.