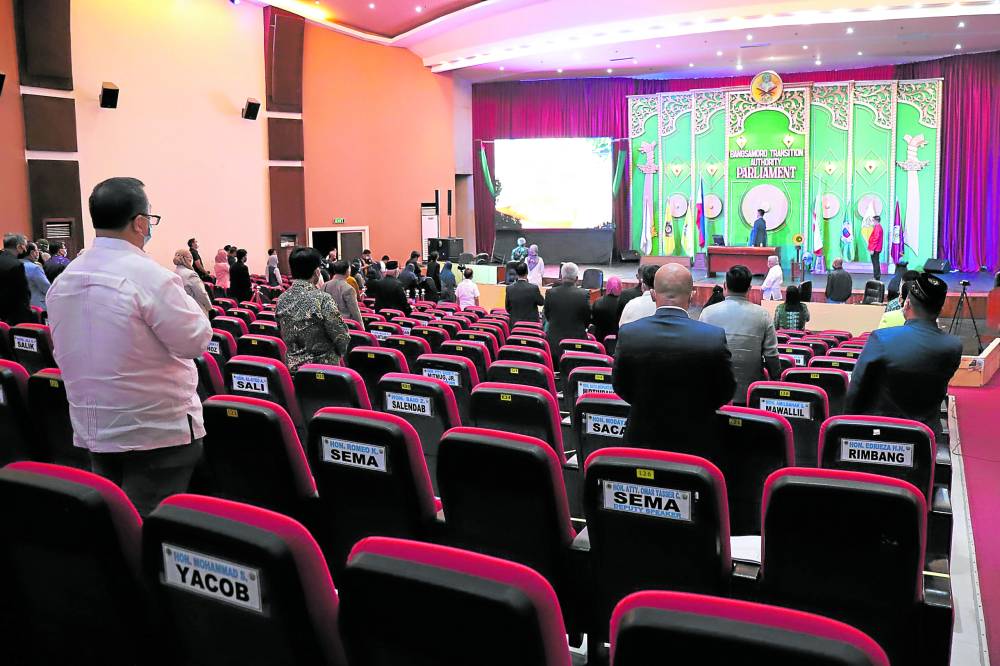 IN SESSION Members of the interim Bangsamoro parliament convene at the Sultan Kudarat Convention Center in Cotabato City for one of their sessions in this photo taken in July 2021. President Rodrigo Duterte recently decided to keep the current composition of the 80-member body even as the transition period is extended by another three years or until 2025. —PHOTO FROM BANGSAMORO PARLIAMENT WEBSITE

The Security, Justice and Peace Cabinet Cluster (SJPCC), in a statement on Friday, said it recommended for the president to maintain the current composition of the 80-member BTA, and it was approved by the President on February 21.

The BTA was supposed to end its institutional life on June 30 this year, after the regular members of the BARMM parliament would have been elected during the national and local elections on May 9.

But Congress postponed the regional elections to 2025, extending the BTA by three more years.

Under Republic Act No. 11593, which Duterte signed on October 28, 2021, the BTA will continue to be the BARMM’s interim government during the extended transition period.

However, the president has the option to appoint new members.

This possibility has driven a mad race for appointment, especially for seats of government nominees.

Omar Yasser Sema, deputy speaker of the interim Bangsamoro Parliament and among the 10 Moro National Liberation Front members in the BTA, said they welcomed the President’s approval of the SJPCC recommendation as it would ensure continuity and consistency in the implementation of Bangsamoro program and allow for the stability in a region until 2025.

The SJPCC said keeping the current BTA membership was one way of “building on and sustaining the gains of the Bangsamoro peace process.”

“Undoubtedly, the BTA has over the past two years played an instrumental role in uplifting the lives of the Bangsamoro people and unleashing the economic potential of the region,” the four Cabinet officials noted.

“Given these major accomplishments, its current membership must not only be given due recognition, but must also be given the chance to complete what it has started,” they added.