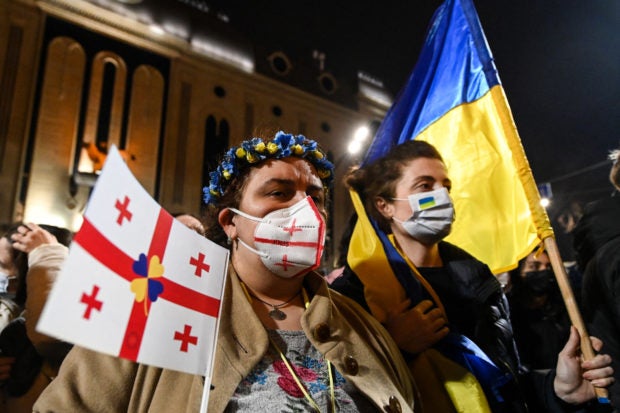 Demonstrators hold placards and wave flags during a rally in support of Ukraine in Tbilisi on March 1, 2022. AFP

Georgia calls on the EU “to review our application in an urgent manner and to make the decision to grant Georgia the status of an EU membership candidate”, he told journalists.

The decision was made “based on the overall political context and the new reality”, he added.

Georgia’s EU integration would put the country “on a path which will lead our country to a qualitative increase in our population’s wellbeing, security, and to de-occupation,” he added.

Georgia’s ruling party has faced strong pressure from opposition parties to follow Kyiv’s suit. The MEP’s vote on Ukraine was largely seen in Georgia as a window of opportunity to advance its own EU aspirations — a goal enshrined in the country’s constitution.

Last year, the Georgian government announced its intention to apply for EU membership in 2024.

The war in Ukraine strengthened the West’s focus on Georgia and Moldova, another ex-Soviet republic seeking EU membership. Some observers view these countries as possible targets for the Kremlin after Ukraine.

Last week, Georgian President Salome Zurabishvili was in Paris and Brussels to argue for Europe’s commitments to Ukraine being extended to Georgia.

Even if granted candidate status however, Georgia and Ukraine will face a protracted and complex accession process. They would have to implement sweeping reforms to comply with the 27-nation bloc’s political and economic standards.

Georgia’s and Ukraine’s efforts to have closer ties with the West have long angered Russia.

Tensions with Moscow culminated in Russia’s invasion of Georgia in 2008.

Both Georgia and Ukraine have both signed association agreements with the EU designed to bring them closer together economically and politically.

The agreements also include free trade deals between the countries and the EU as well as visa-free travel for its nationals for a short stay in the Schengen area.

But they give no guarantee of eventual membership.

‘Prove that you are with us,’ Ukraine’s Zelenskiy tells EU