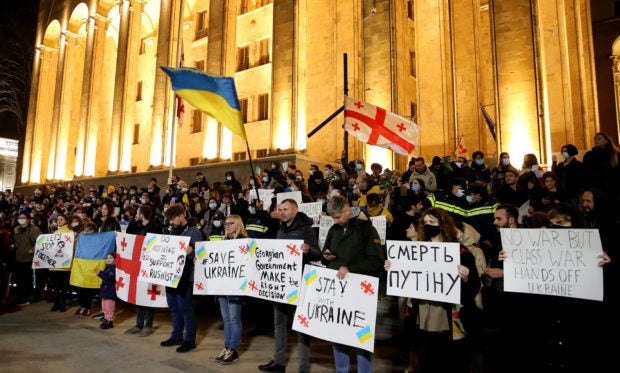 Demonstrators hold placards and wave flags during a rally in support of Ukraine, in Tbilisi on February 25, 2022. AFP

TBILISI — Some 30,000 people rallied in Georgia’s capital on Friday in an outpouring of solidarity with fellow ex-Soviet country Ukraine.

The war which has claimed dozens of lives left Georgians recalling a deadly Russian invasion of their territory in 2008.

“We feel for Ukrainians, maybe more than other countries do, because we’ve seen Russia’s barbaric aggression on our soil,” 32-year-old taxi driver Niko Tvauri told AFP.

“Ukraine is bleeding and the world is just watching and speaks of sanctions which can’t stop Putin,” she said, bursting into tears.

Georgian President Salome Zurabishvili has expressed solidarity with Ukraine and called on Russia to halt the hostilities which she said “shocked the Georgian nation.”

But Prime Minister Irakli Garibashvili sparked an uproar, announcing Friday that Tbilisi “will not join” the economic and financial sanctions the West has imposed on Russia over the invasion.

In August 2008, Russia launched a ground assault against Georgia which was battling pro-Russian militia in its separatist region of South Ossetia.

The fighting ended after just five days with a European Union-mediated ceasefire, but claimed more than 700 lives and displaced tens of thousands of ethnic Georgians.

After the war that left Georgia partitioned, Russia recognised South Ossetia and another separatist region, Abkhazia, as independent states and stationed troops there permanently.

‘Russia out!’ Worldwide protests in solidarity with Ukraine