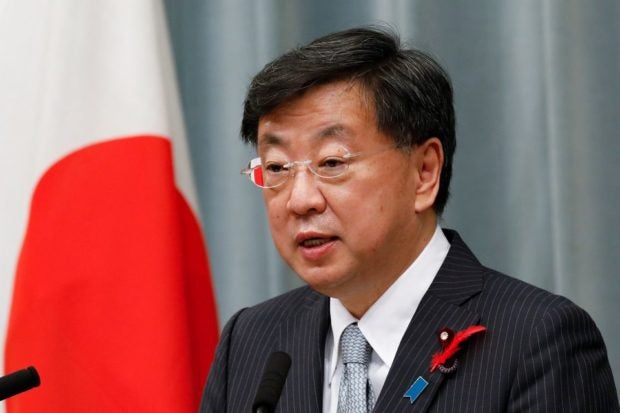 TOKYO — Following Russia’s invasion of Ukraine, the Japanese government is on alert for provocations in East Asia by China, Russia and North Korea, which it believes might attempt to take advantage of the turmoil in international affairs.

In addition to North Korea’s launch of a ballistic missile into the Sea of Japan on Sunday, military exercises by China and Russia have become more active in the waters and airspace around Japan since the beginning of this year, prompting the Japanese government to step up intelligence gathering and surveillance activities.

“The launch came when the international community was responding to Russia’s invasion of Ukraine. It is utterly unacceptable,” Matsuno said. “We will drastically strengthen our defense capabilities with a sense of urgency.”

According to the Defense Ministry, the missile had a lofted trajectory, which would make it difficult to intercept.

It was Pyongyang’s eighth missile launch this year.

Defense ministry officials widely believe North Korea will continue to provoke the United States, which will likely be too distracted with the situation in Ukraine to respond to the provocations.

On Feb. 22, the Chinese military announced it was conducting landing drills with new vessels in the East China Sea. It is thought that the drills are intended to deter the United States by showing off the strength of China’s naval forces in eastern areas including Taiwan and the East China Sea.

Russia has also been stepping up military activities in the Far East, a key area in its conflict with the United States.

In January, the Russian military conducted shooting drills in Japan’s northern territories and the Chishima archipelago, called the Kuril Islands in Russia. On Feb. 12, Russia announced that its fleet had spotted a U.S. attack submarine entering Russian waters, but the U.S. side denied the claim.

Japan and the United States are trying to avoid a power vacuum in East Asia to prevent China, Russia and North Korea from further provocations and unilateral attempts to change the status quo by force.

The U.S. and Thai militaries have been conducting one of the largest multilateral military exercises in Asia in Thailand and other countries since Feb. 18.

The so-called Cobra Gold exercises involve about 3,500 personnel, including members of the Japanese Self-Defense Forces.

The exercises, which include drills using amphibious armored vehicles with a Taiwan contingency in mind, are aimed at maintaining the presence of the U.S. military.

However, since the United States has decided not to intervene in the defense of Ukraine at this time, some members of the ruling Liberal Democratic Party are concerned about whether the U.S. military will act in the event of a similar crisis in Taiwan.

The United States’ Taiwan Relations Act stipulates the provision of arms to Taiwan, but does not stipulate obligations to defend the island.

Former Prime Minister Shinzo Abe said in a TV program on Sunday: “The United States is adopting an ambiguous strategy toward Taiwan. The U.S. should abandon its ambiguity.”