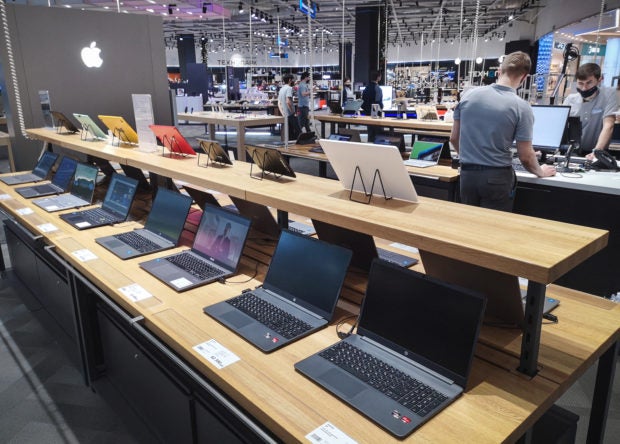 A vendor stands next to laptops displayed in Technopark home electronics shop in Moscow on February 25, 2022. AFP

MOSCOW — Having lived through numerous financial cataclysms since the fall of the Soviet Union, Moscow’s residents seemed resigned Friday in the face of Western sanctions over Russia’s invasion of Ukraine, knowing they will have to bear the costs.

“We have been living with Western sanctions for years,” said 38-year-old Alexander Lyubinsky.

While European penalties against major Russian banks and the technology sector promise to be brutal, Russians have felt the sting of sanctions since Moscow annexed Ukraine’s Crimean peninsula in 2014.

Marina Ivanova, a 39-year-old economics instructor at a Moscow university expects the price of her food basket to rise by at least 20 percent.

The Russian ruble has already tumbled against the world’s main currencies despite efforts by the Russian central bank to prop it up.

“I am worried and I have no idea how to recover from this hike,” she said.

Deadly fighting between Russian and Ukrainian forces continued Friday on the outskirts of Kyiv, with dozens wounded.

US President Joe Biden has announced severe economic penalties against Russia for the invasion, saying they will make Russian President Vladimir Putin “a pariah on the international stage”.

A major Russian electronics store chain, DNS, announced earlier this week that retail prices will rise by at least 30 percent amid a supply crunch, its general director Dmitry Alekseev said on Telegram.

Moscow resident Matvei Shevchenko, 42, is doing home renovations and said that sales of certain household appliances and electronics have been suspended as “sellers are waiting to see how the situation develops”.

Shevchenko, who is unemployed, said he could not get the air conditioning unit that he wanted for his home and now will have to turn to a Chinese online retailer.

But the biggest worry for him and for his friend Andrei Yegorov, a 40-year-old psychotherapist, is having their European visas cancelled.

But today he wonders if he would even be able to travel to Turkey in mid-March “with everything that is happening around Russia”.

The Czech Republic, Latvia and Lithuania on Thursday announced they had stopped issuing visa to Russian citizens.

Olga Smirnova, a 48-year-old broker in Moscow is afraid that Russia will become “closed” to the world. But she hopes that tensions will eventually ease.

“Once the acute phase is over, sooner or later, there will be no more sanctions,” she says.

Meanwhile, Russian banks have been scrambling to reassure worried customers lining up at ATMs to withdraw cash.

Four of Russia’s major banks directly affected by European sanctions, Sber, VTB, Alfa-Bank and Otkritie, published a rare joint press release to allay concerns, saying they have enough cash and that no cash withdrawal limits have been imposed.

For her part, Smirnova is hopeful that the banking sanctions will not touch her because major banks have an insurance policy on savings.

“I haven’t been affected by the sanctions so far”, she says.