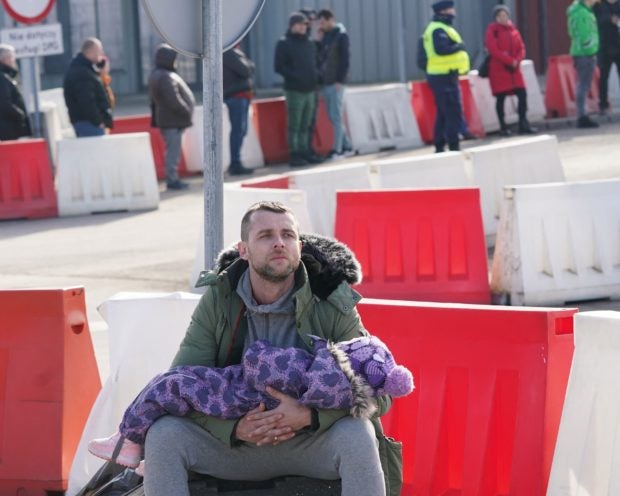 A Ukrainian man with a child waits for his wife as Ukrainians cross the border from Ukraine to Poland at the Korczowa-Krakovets border crossing on February 26, 2022, following the Russian invasion of Ukraine. AFP

Just four hours earlier he had put the number at 100,000 arrivals, showing just how quickly the refugees are flowing into their EU neighbour.

“At this moment, there are 115,000 people who have crossed the Ukrainian-Polish border since the war erupted” on Thursday, Szefernaker told reporters in the border village of Dorohusk, eastern Poland.

The head of the Polish border guard, Tomasz Praga, said nearly 50,000 people had crossed into Poland from Ukraine on Friday alone.

Poland, which was already home to an estimated 1.5 million Ukrainians before Russia’s invasion and which has expressed steadfast support for Ukraine, has so far seen the bulk of those fleeing Ukraine cross into its territory.

“More than 150,000 Ukrainian refugees have now crossed into neighboring countries, half of them to Poland, and many to Hungary, Moldova, Romania and beyond,” UN refugee chief Filippo Grandi tweeted on Saturday.

More than 150,000 Ukrainian refugees have now crossed into neighbouring countries, half of them to Poland, and many to Hungary, Moldova, Romania and beyond.

Displacement in Ukraine is also growing but the military situation makes it difficult to estimate numbers and provide aid.

“Displacement in Ukraine is also growing but the military situation makes it difficult to estimate numbers and provide aid,” he added.

Szefernaker said 90 percent of the refugees entering Poland have places to go, such as the homes of friends or family, but the remainder are seeking help at nine reception centres set up along the border.

The centres offer meals, medical care and a place to rest, as well as any necessary information.

Those with nowhere to go are then taken by bus to various accommodation options prepared in advance.

The EU member of 38 million people has also readied an ambulance train in the border city of Przemysl.

Polish government official Michal Dworczyk said that, if and when necessary, the train would travel to the Ukrainian border city of Mostyska, pick up the wounded and transport them to Warsaw for hospital treatment.

“I hope that we won’t have to use these railroad cars,” he told reporters.

He added that Poland is doing everything it can to help its neighbour under attack.

“Over the last few days we’ve seen an incredible burst of solidarity among Poles,” he said.

“I have yet to come across someone who didn’t want to somehow help.”