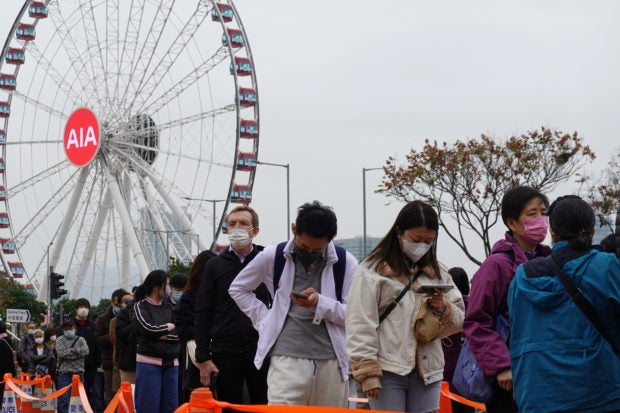 Hong Kong — Hong Kong said Friday it would postpone picking the city’s new leader and was preparing to test the entire population for Covid-19 as it struggles to tackle a wave of infections.

The Chinese financial hub is currently in the throes of its worst-ever coronavirus outbreak, registering thousands of cases a day with hospitals reaching breaking point and a Beijing-mandated zero-Covid policy collapsing.

A small committee of Beijing loyalists had been set to choose the city’s new chief executive in late March, with the nomination period for candidates beginning Sunday.

But current leader Carrie Lam on Friday announced the selection would now need to be pushed back to May 8.

“The decision is due to Hong Kong facing the most severe situation since the pandemic began two years ago. It is a critical situation,” she told reporters.

Lam confirmed authorities were moving to test all 7.5 million residents.

“One of the measures that we are planning — planning very seriously — is a mandatory universal testing. So we will test everyone in Hong Kong,” she said, although she once again ruled out a full city lockdown.

Mass testing has been used frequently on the Chinese mainland alongside strict lockdowns to quickly stamp out clusters.

But it is unclear what effect it will have in a city with so many daily infections and where a mainland style lockdown would be hard to pull off.

It is also not clear where Hong Kong would house and isolate so many positive cases once discovered.

Lam said the new measures were “in line with the spirit expressed by President Xi Jinping in his important instructions, namely that we must make controlling the epidemic our overriding priority”.

Earlier this week Xi had called for Hong Kong to take “all necessary measures” to suppress the current outbreak.

Like mainland China, Hong Kong has stuck to a rigid zero-Covid policy that largely kept the virus out but left the international business hub cut off for the last two years.

Those defenses have now come crashing down with the highly infectious Omicron variant entry into the local community after infected flight crew and residents returned from overseas.

Prior to the current outbreak, Hong Kong had recorded just 12,000 infections for the whole pandemic.

The surge has caught the government off guard with few preparations in place for dealing with zero-Covid being breached.

Authorities have since scrambled to locate thousands of hotel rooms and unused public housing blocks to isolate the infected as well as a location to build a temporary hospital — and sought help from the Chinese mainland.

It comes at a politically sensitive time for Hong Kong.

Beijing is currently remolding the once outspoken city in its own authoritarians image after huge and sometimes violent democracy protests erupted in 2019.

It has imposed a national security law that criminalizes much dissent, and new “patriots only” political changes that vets anyone standing for public office for their political loyalty.

The new chief executive selection was supposed to be the final step in this new process.

Days before the old nomination period had been set to begin Lam had yet to say whether she would seek another five-year term.

Beijing has also given no indication whether it wants her, or someone different, to lead while no serious contender with a realistic prospect of success had announced a candidacy either.

The chief executive is chosen by a small committee of loyalists and each time the candidate perceived to be Beijing’s top pick has comfortably won enough votes.