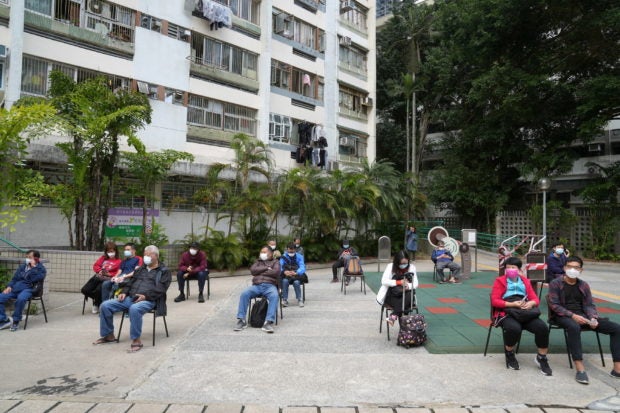 The daily tally of COVID infections in the global financial hub rose to more than 40 times the level at the start of February as health authorities reported a record 4,285 confirmed new infections on Tuesday and another 7,000 preliminary positive cases.

The directive from Xi ramps up pressure on Hong Kong Chief Executive Carrie Lam a day after she said her government’s response to the outbreak had been unsatisfactory, with hospitals and medical staff unable to cope.

Xi instructed Chinese Vice Premier Han Zheng to relay to Lam his “concern about the pandemic situation” and his care for local residents, according to front-page stories in newspapers Wen Wei Po and Ta Kung Pao.

Xi said the government “must mobilize all power and resources to take all necessary measures to ensure the safety and health of the Hong Kong people and ensure the stability of the society,” according to the newspapers.

Both newspapers, which typically support Beijing’s interests in Hong Kong, said Xi made the remarks recently but did not specify where he was speaking.

Local authorities must “firmly implement Xi’s instructions,” the papers said, adding that Beijing has set up a cooperation mechanism to ensure coordination.

Lam, who has not confirmed whether she will seek another five-year term as head of the Chinese-ruled city, said she could “not preclude” the possibility of postponing next month’s chief executive election.

No heavyweight contender has yet declared their candidacy, an unusual situation just five weeks before an election.

Lam expressed her “heartfelt thanks” to Xi in a government statement on Wednesday that echoed the Chinese president’s words.

The government said it “must follow the important instructions of President Xi Jinping, take the main responsibility and stabilize the epidemic situation as the overriding task present.”

But the speed of the spread of the highly contagious Omicron variant of the virus has left authorities floundering, with Lam saying they can no longer keep up with testing and isolation mandates.

Dozens of patients were being treated in makeshift open-air spaces outside medical centers in chilly weather as several hospitals operated at over 100% capacity. Over 12,000 infected patients are waiting to be hospitalized, local broadcaster Cable reported on Wednesday.

China has said it would help the city boost its testing, treatment, and quarantine capacity, and secure resources from rapid antigen kits and protective gear to fresh vegetables.

Four people returning to China from Hong Kong have tested positive for coronavirus and placed in quarantine, authorities in Guangzhou and Chenzhou said on Wednesday.

Hong Kong has recorded around 26,000 infections since the start of the pandemic, including just over 200 deaths, far fewer than other similar-sized major cities.

However, medical experts have warned cases could surge to 28,000 daily by the end of March amid worries about high levels of vaccine hesitancy among the elderly.

Health authorities said nine people had died from the virus in the past 24 hours including a three-year-old girl.

For Hong Kong’s 7.5 million residents, the surge in cases comes amid rising fatigue with the restrictions aimed at protecting them from the pandemic.

Borders have been effectively sealed for around two years and turned the global travel and business hub into one of the world’s most isolated major cities.

Venues from churches, pubs, schools, and gyms remain shut with public gatherings of more than two people banned. Dining in restaurants is not allowed after 6.00 pm, while most people are working from home.

Scores of businesses have been forced to close due to the ongoing restrictions, having suffered during closures over the past two years and anti-government protests in 2019.