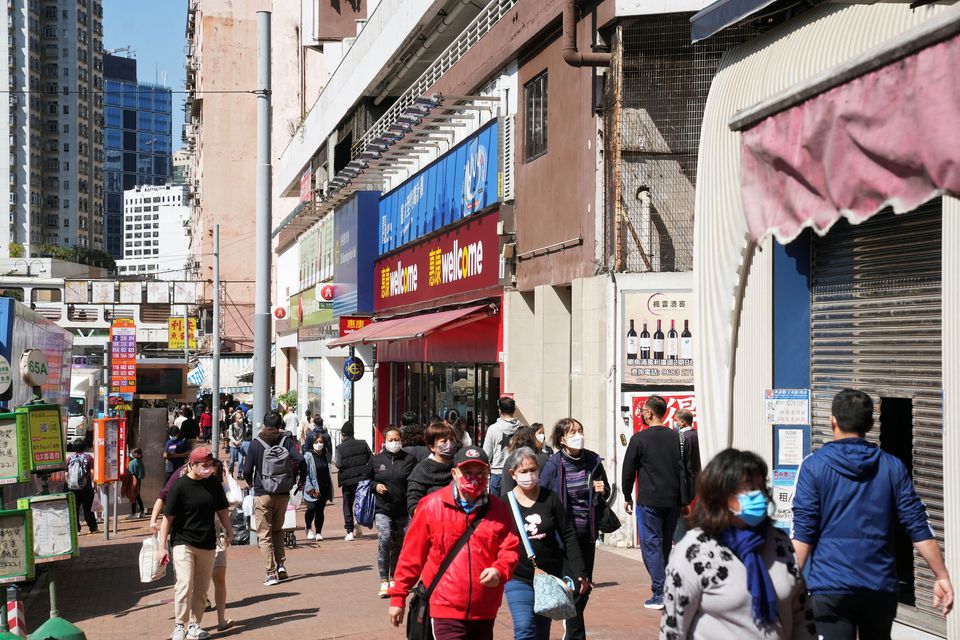 HONG KONG — Hong Kong leader Carrie Lam on Tuesday ruled out a citywide lockdown to fight COVID-19, but a surge of infections meant she could not “preclude” the possibility of postponing next month’s chief executive election.

Lam, who has not confirmed whether she will seek another five-year term as head of the Chinese ruled city, said her government’s response to the outbreak had not been satisfactory with hospitals and medical staff overwhelmed.

Daily infections have surged by about 20 times over the past two weeks and Lam said authorities are unable keep pace with their testing and isolation mandate.

“There are no plans for a widespread city lockdown,” she said but doubled down on her ‘dynamic zero’ coronavirus strategy, similar to mainland China which seeks to curb outbreaks as soon as they occur.

“We cannot surrender to the virus. This is not an option.”

The city is expected to report at least 1,501 new infections on Tuesday with another 5,400 preliminary positive cases, broadcaster TVB said, citing an unidentified source.

Health authorities reported a record 2,071 infections on Monday, with another 4,500 preliminary positive cases.

Asked whether the city’s chief executive election, set for March 27, would go ahead, Lam said that the plans were unchanged, but given “the severity and speed of this latest wave” the situation would be continuously reviewed.

“So, I cannot preclude any possibilities at this moment,” she said.

A committee of 1,500 members, all vetted by authorities for their “patriotism” and loyalty to Beijing, participate in electing the next leader. The chief executive election has never been postponed since the city’s handover from Britain to China in 1997.

Two years ago, authorities cited the coronavirus ito postpone legislative elections, in which some seats are assigned via public vote. Those elections were held in December 2021 under new “patriots only” rules imposed by Beijing.

Restrictions on social and public gatherings, imposed after the pandemic first struck, helped Hong Kong’s authorities stifle a pro-democracy movement whose mass protests had rocked the city in 2019, and a national security law imposed by Beijing in June 2020 effectively ended the unrest.

International travel has been severely hampered due to strict flight restrictions which have turned Hong Kong into one of the world’s most isolated major cities with its borders effectively sealed for around two years.

Most venues from churches, pubs, schools and gyms remain shut while public gathering of more than two people is banned. Dining in restaurants is not allowed after 6.00 pm, while most people are working from home.

Hong Kong will introduce a vaccine pass starting Feb. 24 where residents will have to show proof of vaccination before entering restaurants, supermarkets and shopping malls.

Face to face classes in schools will be suspended until at least March 6, the government said on Monday.

As cases soar in Hong Kong, China has said it would help the city boost its testing, treatment and quarantine capacity, and secure resources from rapid antigen kits and protective gear to fresh vegetables.

Lam said the central government would deliver over 100 million testing kits to the territory. The government is also recruiting more cross border truck drivers to ensure vegetable supply from the mainland after recent shortages due to several infected drivers.

Despite the latest surge, deaths remain far less than in similar-sized cities since the pandemic erupted two years ago.

Hong Kong’s total caseload since the pandemic first erupted is around 25,000 infections, including a little over 200 deaths.

But, with the healthcare system already overstretched, medical experts warn the city could see 28,000 daily infections by the end of March, and there were worries about the large numbers of elderly people who have hesitated to get vaccinated.

Anticipating the need for more isolation facilities, Lam said around 3,000 public housing units and around 10,000 hotel rooms would be converted.