Women live in fear and despair in South African hostel 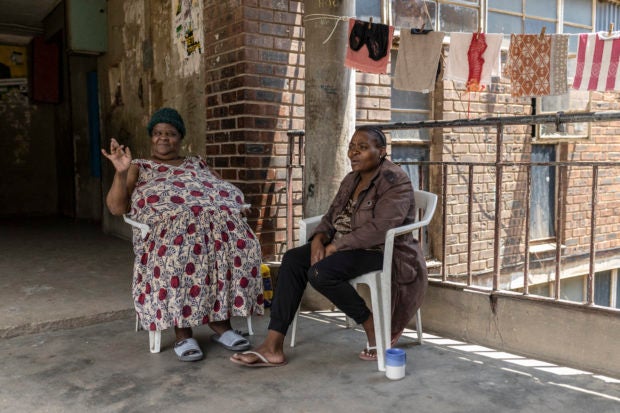 Residents of the the Helen Joseph Women’s Hostel in Alexandra Township spent time outside of their rooms on February 17, 2022. AFP

ALEXANDRA, South Africa — In one of South Africa’s roughest townships, an overcrowded and dilapidated housing complex has maintained one rule for decades: No men allowed.

Sitting in a concrete hallway, Brenda fumes. The electricity went off the night before, with no sign of when it might return. She had nothing for supper. Breakfast was water and bread.

“There’s nothing good here,” said the 62-year-old, who declined to give her last name.

“No electricity, no water. Nothing is good here.”

A nearby puddle gives off a nauseating smell, overflow from the communal toilets.

She first stepped into this complex, which South Africans call a hostel, more than 40 years ago when she moved from her village to the Johannesburg township of Alexandra, hoping to find a better life.

Since then, democracy arrived. Her hair turned grey, she gained some weight. Her dreams for life in Johannesburg disappeared.

Sparkling high-rises rose up across the highway in Sandton, the city’s financial hub known as the richest square mile in Africa.

But she’s spent all those decades living at the hostel: Eight blocks of flats, five floors each, designed like a prison. Laundry hangs in the hallways. Litter covers the yard.

Her neighbors in this hostel are 8,000 other women, plus 3,000 children. Many were born here. On this morning, many were playing outside, during school hours.

Each flats comprises a single room, with a single mattress, but lots of inhabitants.

Originally these hostels were built by the white supremacist apartheid government to house black men on the edge of South Africa’s cities.

The men often worked in the mines. Women weren’t allowed, so their families had to stay behind.

After apartheid, the hostels became popular with Zulus who came to seek their fortunes in the country’s economic heart.

The hostels are glaring reminders of both South Africa’s dark past and its current troubles. They are so synonymous with crime that police will not always go in.

Successive governments have promised to overhaul the hostels, but there’s no sign of the promised money.

And unemployment in South Africa is at record highs, hitting black women the hardest.

In the early 1990s, South Africa suffered through the “hostel wars”, when the residences became the scene of deadly clashes.

In the stairs of the Helen Joseph Women’s Hostel, an ANC poster still clings to a wall.

Built in 1972, the hostel has survived decades of change. But the threat of violence remains terrifyingly real.

A few years ago, a woman was raped and stabbed to death down the corridor from what is now Nomvelo Nqubuko’s room. No one was ever arrested, the 28-year-old said.

In a country where a rape is reported to police every 12 minutes, women here have create their own warning system, said Patronella Brown.

At 32, she’s lived here for five years. If there’s an attack, residents can blow a whistle and their neighbors will arrive in force to dispense vigilante justice.

“It’s not a decent place for anyone to stay,” said Brown. “It’s not a place to raise kids.”

She recalls newborns being found in the rubbish, their corpses wrapped in plastic shopping bags.

“Life is painful here,” she said.

For the kids who grew up behind the building’s broken windows, their world hardly extends beyond the walls.

Phokgedi Lekga was born here, and has never known any home other than the tiny room she shares with her mother.

“The future? It’s so blurry,” she said, taking a drag from a joint.

Half billion more people face poverty due to virus – report

Quality of life on rise for many Africans, report says