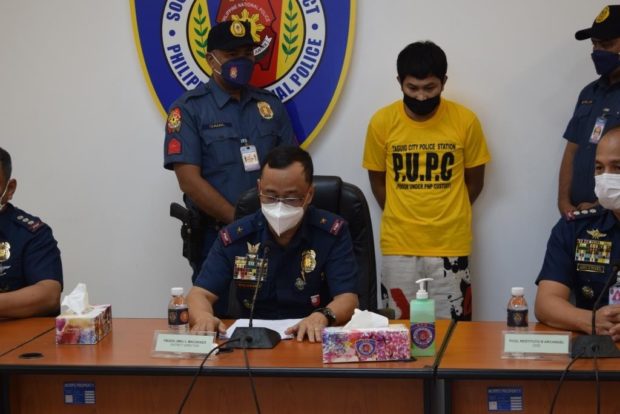 MANILA, Philippines — An alleged member of the Abu Sayyaf Group (ASG) was caught in a buy-bust operation in Taguig recently, the Southern Police District (SPD) reported on Friday.

SPD District director Brig. Gen. Jimili Macaraeg identified the victim as Fahad Dumayag, 31, who was arrested in an anti-drug operation in Taguig City on January 26.

Macaraeg said a confidential informant identified the arrested drug suspect as a member of the ASG.

“A victim-witness physically identified Abu Cola as one of her kidnappers and a member of ASG,” Macaraeg said in a statement.

Dumayag was involved in the kidnapping of members of the Jehovah’s Witnesses in 2002 and Lamitan Siege wherein they took over a hospital and a church in June 2001.

Read Next
Teenage pregnancy numbers down by 10% in 2020 down, PopCom says
EDITORS' PICK
Smart, TNT launch more powerful and value-packed Double GIGA+ 50 offer
Motorcycles, smartphones, and cash prizes up for grabs in TNT’s ‘Tuloy Ang Saya’ Raffle in Mindanao
Having confidential funds not a DepEd norm – Pimentel
Pagasa: No tropical cyclone expected in the next few days
NDRRMC confers posthumous award on 5 fallen Bulacan rescuers
House energy committee chair Arroyo bats for cheap electricity
MOST READ
Sharon Cuneta ‘turned away’ at Hermes boutique in Seoul, welcomed by LV
Marcos in Singapore for F1 Grand Prix – source
WATCH: Coleen Garcia dances with Billy Crawford in France’s ‘Dancing with the Stars’
Having confidential funds not a DepEd norm – Pimentel
Don't miss out on the latest news and information.