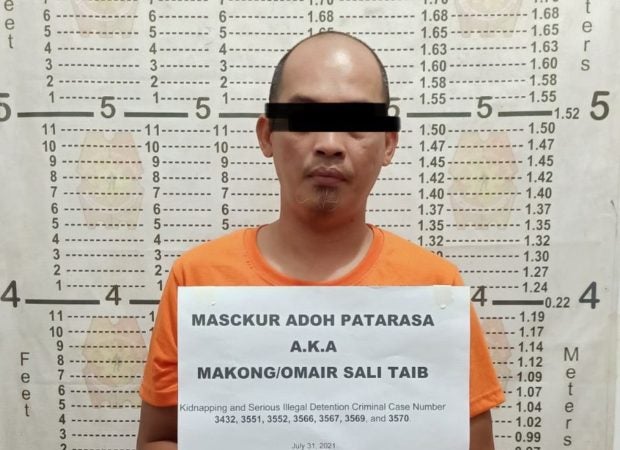 Masckur Adoh Patarasa, a brother-in-law of the late Isnilong Hapilon, is said to be a logistics officer of the Abu Sayyaf Group. (Photo from the PNP)

MANILA, Philippines — A logistics liaison officer of the Abu Sayyaf Group who was arrested on Friday turned out to be a non-uniformed employee of the Philippine National Police (PNP), Gen. Guillermo Eleazar, the PNP chief, said in a press conference in Zamboanga City on Sunday.

Eleazar identified the suspect as Masckur Adoh Patarasa, a brother-in-law of the late ASG leader Isnilon Hapilon. He was arrested in an intelligence-driven police operation in Barangay Asturias in Jolo, Sulu.

“Investigation revealed that Patarasa is an active non-uniformed personnel of the Philippine National Police presently assigned at Banguingui Municipal Police Station, Sulu PPO [Police Provincial Office] but was also found out to be finance and logistics liaison officer of Dauwla Islamiya under the ASG and was included in the Martial Law Arrest Order No. 1 during the Marawi Siege in 2017,” Eleazar said.

Patarasa joined the Jihadist organization in 2001 under ASG leader Khadaffy Janjalani in Basilan but later shifted to ASG Senior Leader Radullan Sahiron in Sulu, according to Eleazar.

He was also known to have direct contact with Jemaah Islamiyah operative Amin Baco, a.k.a. Guro Jihad, and other ASG members.

Further investigation revealed that Patarasa received funds from Almaida Salvin, a designated terrorist included in the U.S. Treasury’s sanctions list who was arrested sometime in April 2019 for illegal possession of explosives through Merhama Sawari, who was killed in Parañaque shootout together with three suspected terrorists on June 20, 2020.

Eleazar lauded the units involved in Patarasa’s arrest, saying: “Your action is a reflection of our campaign to keep the organization free from persons with ill motives.”

“Let us join hands in keeping the Philippine National Police a respectable organization, true to its mandate to serve and protect the people,” he added.