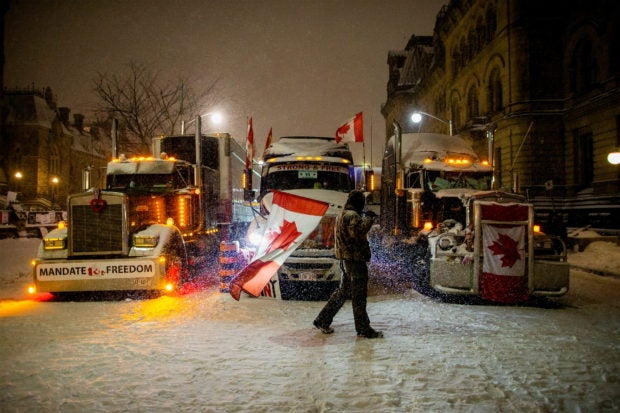 A man walks with a Canada flag in front of a truck as protests against coronavirus disease (COVID-19) vaccine mandates continue, along Wellington street near the Parliament of Canada, in Ottawa, Ontario, Canada, February 17, 2022. (REUTERS)

OTTAWA  – Canadian police on Friday started arresting protesters as part of an operation to end a three-week blockade of Ottawa by hundreds of truck drivers that crippled the capital and prompted Prime Minister Justin Trudeau to assume emergency powers.

“Some protesters are surrendering and are being arrested. We ask protesters to remain peaceful and lawful,” the Ottawa police said in a tweet.

The drivers, joined by thousands of demonstrators and some 400 vehicles, turned the streets around Parliament into a noisy party zone since first arriving on Jan. 28, in what has become one of the worst crises to hit Trudeau since he took power in 2015.

The drivers initially demanded an end to cross-border COVID-19 vaccine mandates but the protest gradually turned into an anti-government and anti-Trudeau demonstration.