Vessel monitoring: Key to the fight vs plunder of PH seas | Inquirer News

Vessel monitoring: Key to the fight vs plunder of PH seas MANILA, Philippines––“I would like to remind everyone that the sea gives us our livelihood and food. We need to take care of it.”

Fisherman Ruperto Aleroza, head of the group Pambansang Katipunan ng mga Samahan sa Kanayunan, made this appeal to his fellow fishermen in light of efforts to fully implement the Vessel Monitoring Measure (VMM) system which would keep track of commercial fishing vessels, among other objectives.

Aleroza had joined the group Oceana in appealing for full enforcement of the VMM.

The appeal came in the wake of an order by Solicitor General Jose Calida to the Bureau of Fisheries and Aquatic Resources (BFAR) and National Telecommunications Commission (NTC), which were among agencies tasked with implementing VMM, to comply with a court decision voiding Fisheries Administrative Order (FAO) No. 266, the legal document which is now basis of VMM enforcement.

FAO No. 266 was signed by Agriculture Secretary William Dar on Oct. 12, 2020 to list down rules and regulations in the implementation of the VMM and installment of Electronic Reporting System (ERS) in commercial fishing vessels operating in the Philippines.

The BFAR said the VMM was expected “to enhance the capacity of the government to monitor fishing operations and enforce laws in Philippine waters to achieve long–term sustainability of our resources.”

The decision granted the petition, filed by the Royale Fishing Corp., Bonanza Fishing and Market Resources and RBL Fishing Corp., which said that Sections 14 and 119 of Republic Act No. 8550 should not be implemented.

The provisions of the Fisheries Code of the Philippines, as amended by Republic Act 10654, was implemented by FAO No. 266. But the fishing corporations said these are not constitutional.

Section 14 provides that DA-BFAR should establish a monitoring, control and surveillance system in coordination with local government units, fishing councils, the private sector and other agencies involved in the fisheries sector.

This was to make certain that the Philippines’ fisheries and aquatic resources are “judiciously and wisely utilized and managed on a sustainable basis and conserved for the benefit and enjoyment exclusively of Filipino citizens.”

Section 119 provided that no municipal, commercial or distant water fishing vessel shall engage in fishing without complying with the VMM promulgated by the DA-BFAR in coordination with local governments.

The fishing corporations which are engaged in commercial deep-sea fishing, however, said the provisions violated their constitutional right to privacy and protection from unlawful searches.

They said FAO No. 266 also violated the equal protection clause and the law it seeks to implement, saying that the release of FAO No. 266 violated their right to participate in the decision-making process.

This was the reason that last Jan. 17, some fishing corporations asked the RTC to cite BFAR director Eduardo Gongona for alleged disregard of the decision which prevented the implementation of FAO No. 266.

The Office of the Solicitor General (OSG) said that as the RTC made permanent its preliminary injunction, and unless the Supreme Court (SC) issues any injunctive writ, the BFAR and NTC should desist from implementing FAO No. 266.

Its new legal opinion was different from its earlier stand that BFAR and NTC can still implement FAO No. 266 and direct commercial fishing operators to install the VMM.

For lawyer Gloria Ramos, vice president of Oceana, the recent reversal in the position of the OSG on the implementation of FAO No. 266 is baffling, “to say the least.”

PaNaGat and Oceana said that Republic Act 10654, which amended the Fisheries Code of the Philippines, prohibits RTCs from issuing injunctions, as provided by Section 134.

The prohibition against the enforcement of environmental laws was likewise reiterated in the SC’s rules on environmental cases, and the Office of the Court Administrator’s Circular No. 87-2016, they said. 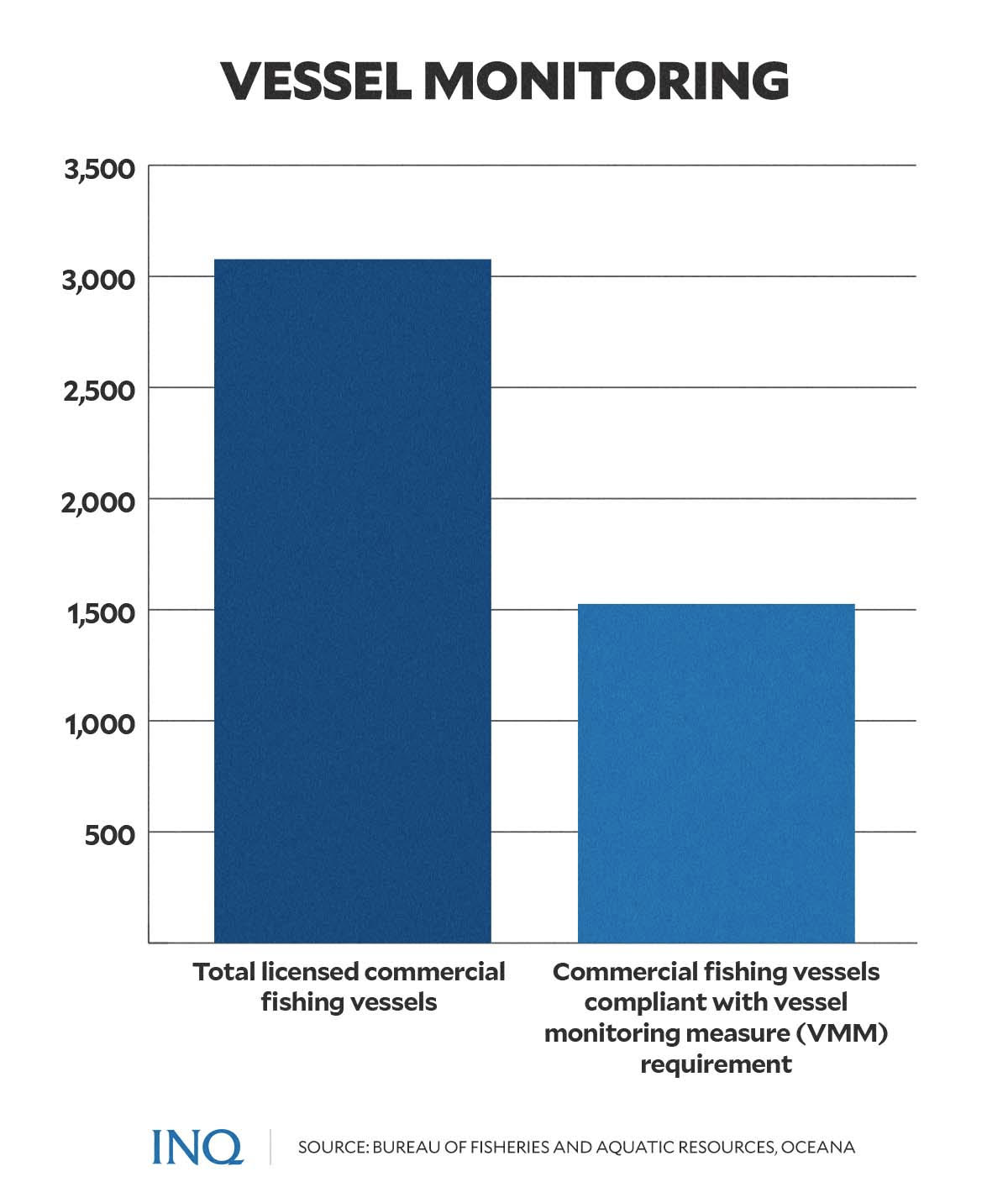 For Ramos, the installation of VMM in commercial fishing vessels is a requirement of Republic Act 10654. This requirement, she said, will strengthen the monitoring, control and surveillance system required by the law.

Oceana said based on BFAR’s record last month, the implementation of VMM has already reached 50 percent, or 1,526 of the 3,077 total commercial fishing vessels with license to operate in Philippine territorial waters.

VMMs were expected to track the location, course and speed of fishing vessels in real time to collect data and information that would help manage the Philippines’ fish and other marine resources, according to the BFAR.

When FAO No. 266 was signed in 2020, it directed that vessels weighing 3.1 to less than 30 gross tons (GT) should have a BFAR-approved vessel monitoring system (VMS) installed within one year.

Vessels weighing 30 GT or more, FAO No. 266 said, should immediately install a VMS. 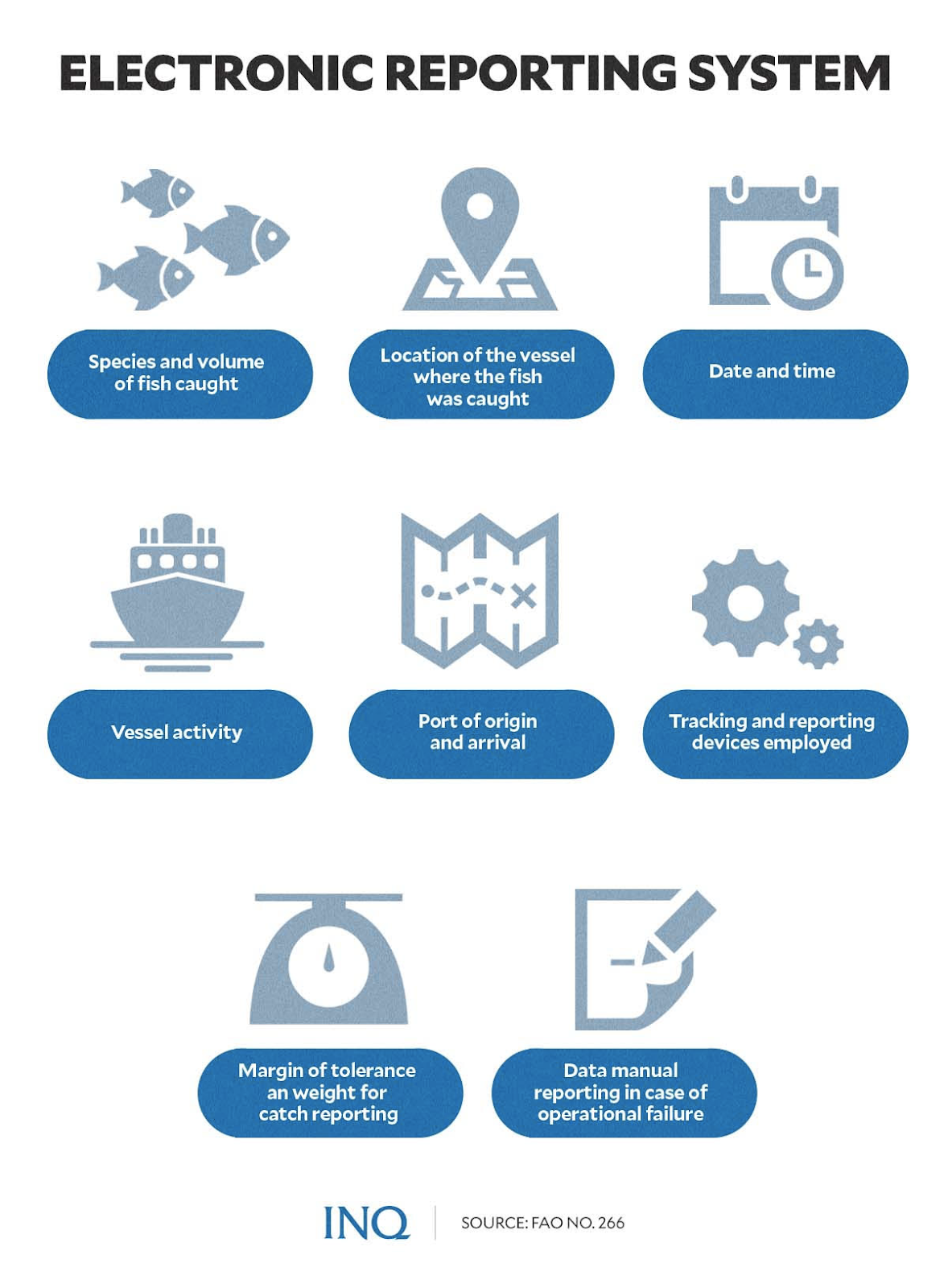 ERS will be for the recording and transmission of catch data, like species and volume of fish caught, location of the vessel where the fish are caught, vessel activity and the vessel’s port of origin and arrival.

BFAR said the ERS was expected to provide these minimum data in real time:

The National Fisheries Monitoring Center was tasked with hosting the system of all Philippine-flagged fishing vessels within Philippine waters, which include the exclusive economic zone (EEZ), high seas and EEZ of other nations.

Why is VMM needed?

For fishermen and Oceana, VMMs are essential, especially for the protection of municipal waters that are critical to the recovery of the ocean from decades of overfishing, illegal fishing and declining fish catch.

Republic Act No. 10654 designates 15 kilometers from the shoreline as municipal waters––reserved for the preferential use and access of municipal and artisanal fisherfolk pursuant to the social justice provision of the 1987 Constitution. 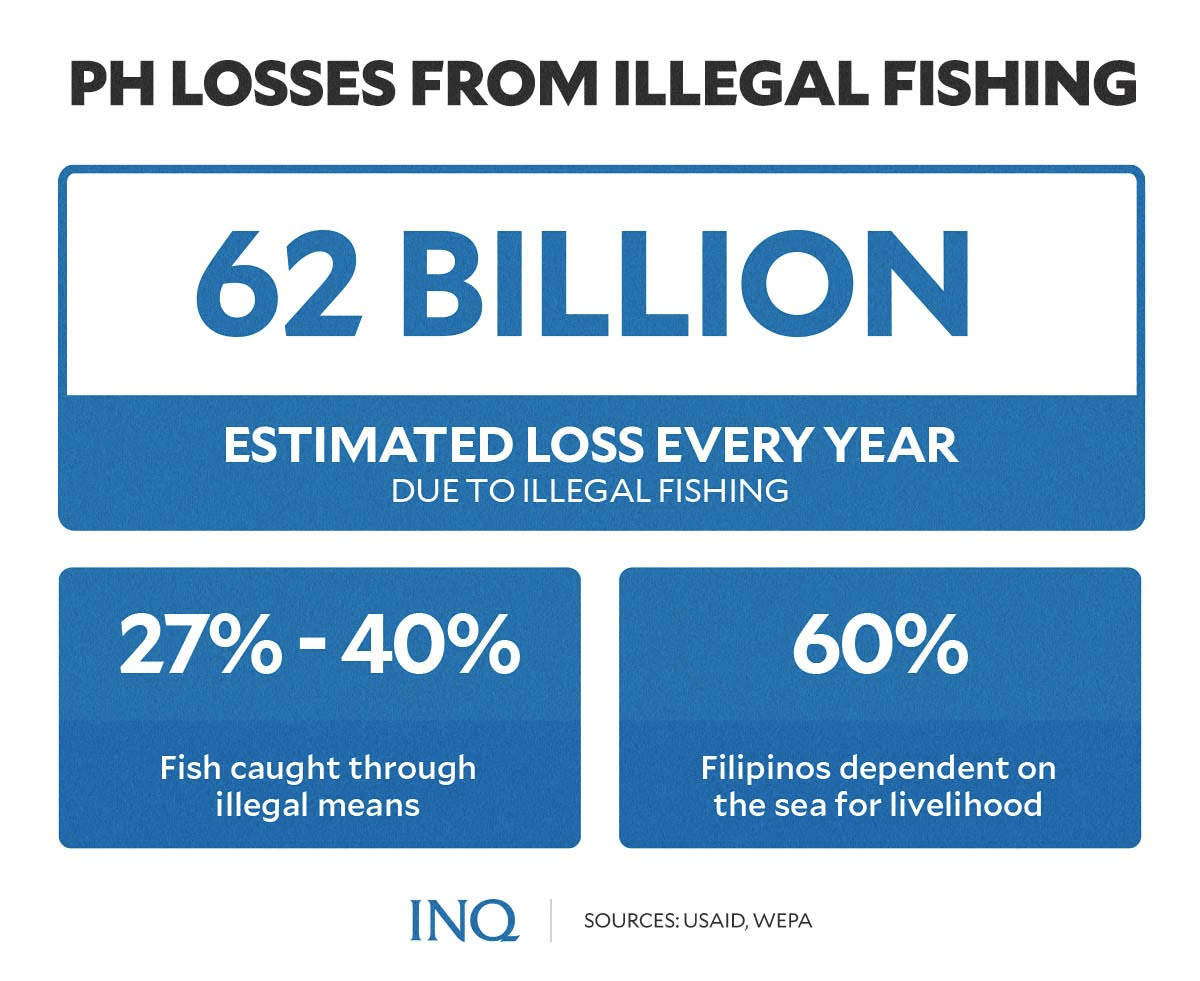 The United States Agency for International Development (USAID) said in 2020 that the Philippines has been losing an estimated P62 billion yearly because of illegal fishing.

It revealed that in the Philippines, illegally caught fish amounted to 27 percent to 40 percent of all fish caught in 2019. The USAID study quantified illegal, unreported, and unregulated fishing.

The USAID found that 30,000 vessels are still not registered while commercial fishers do not report haul reaching almost 422,000 metric tons of fish each year.

It said these show the immense impact of illegal, unreported, and unregulated fishing in the Philippines’ marine ecosystem.

This, as 60 percent of Filipinos live in coastal towns and highly depend on the sea for livelihood.

For Oceana’s Ramos, “Illegal fishing has remained a problem even if we have the law. The intrusion of commercial fishers in municipal waters caused this problem of overfishing.”

“Our fish stocks are continuously decreasing at an alarming rate. This has caused unjust suffering to poor artisanal fisherfolk that’s why the government has to abide by its mandate to protect the coastal communities’ livelihood and the food security of the Filipino people,” she said.

BFAR said the VMM likewise ensures the safety of fishermen through a tracking device that would monitor the vessel’s location in instances of accidents and disasters.