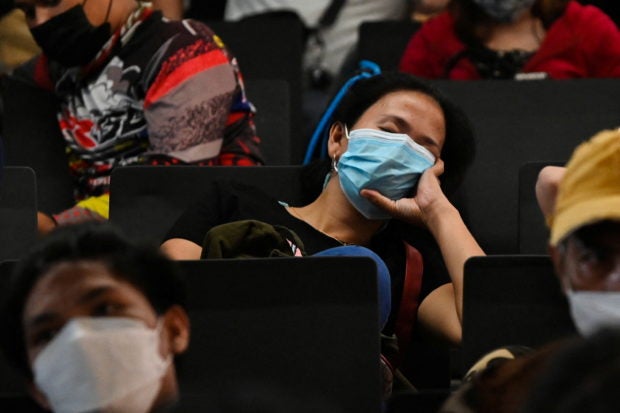 FILE PHOTO: A woman wearing a face mask as protection against the new coronavirus disease (COVID-19) waits to ride a bus going to provinces, a day before the New Year’s Eve, at a bus terminal in Paranaque City, Metro Manila, Philippines, December 30, 2021. REUTERS/Lisa Marie David

MANILA, Philippines — An infectious disease specialist said Thursday that the country should continue requiring the use of face masks. But if the government decides to scrap it by the last quarter of this year,  the expert said the face mask mandate should remain for immunocompromised people.

“We can transition to a lower alert level or we can take out the alert level system as long as cases are really stable, and… as long as there will be no more community transmission that can really cause a spike and surge of these cases,” Dr. Rontgene Solante, chief of the Adult Infectious Diseases and Tropical Medicine Unit at the government-run San Lazaro Hospital in Manila, said in an interview with ABS-CBN News Channel’s Rundown.

“But again I think the mask mandate will be a long way to go. I still suggest it should be there,” he also said.

Solante was reacting to a remark of vaccine czar Carlito Galvez Jr., who said that the mandatory use of face masks would “most likely” be lifted by the fourth quarter of 2022.

Solante noted that the government should first ensure sufficient “population immunity” against COVID-19 before removing the face mask mandate. He also said there should be no new SARS-CoV-2 variant of concern by then to justify the face mask requirement removal.

But he also pointed out that the immunity against COVID-19 for a portion of the population may have waned by the fourth quarter of 2022.

“My only reservation there is that when we will be in December and if still, we have Omicron variant, a certain part of the population will also have their waning immunity during that time. If you are given the booster this part of the year, four to six months after, then the chances of another possible surge will be there because of that waning immunity” he said.

“So if ever there will be a significant drop in the cases by that time, and a lot of people will already be vaccinated, I still want to protect a specific population that they will continue to wear masks, and these are the vulnerable population and those who are immunocompromised,” he added.

Solante also cautioned that an increase in new coronavirus infections may still happen if the face mask mandate is lifted.

“Our population density is really high and you know when we will be in this part of that time of the year when masking will be abolished, then there will always be some areas where there will be spikes especially for those unvaccinated population,” he said.

“So I think moving forward with that particular situation, we need to look at the scenario and take a closer look on who should be wearing the mask and who should be prioritized to be protected if ever there will still be cases,” he added.