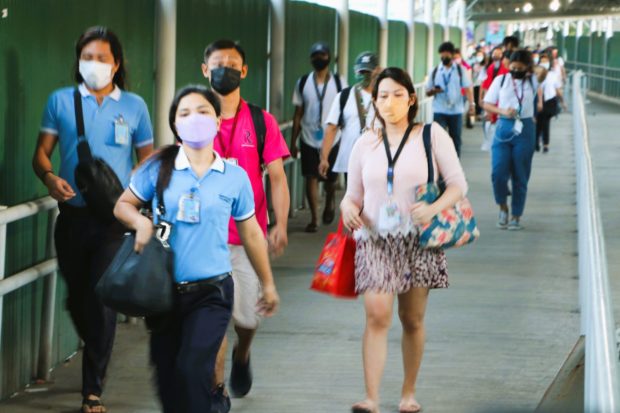 MANILA, Philippines — As the spread of COVID-19 continues to slow down and more people get vaccinated, the government hopes to “close the book” on the pandemic starting in March, or two years since the first local transmission of the coronavirus was reported in San Juan, according to the presidential adviser on COVID-19, Vince Dizon.

He cautioned, however, that while the government was aiming to begin implementing the “new normal” next month, the move out of the pandemic would depend on improving the government’s immunization drive to reach more members of the vulnerable population, increasing the vaccination rate in some regions and convincing more individuals to get their booster shots.

Acting presidential spokesperson Karlo Nograles, quoting the World Health Organization, said an increased vaccination rate would allow the Philippines to begin moving out of the pandemic this year.

“The acute phase of the pandemic, according to the WHO, could end this year, of course with one qualifier: that the 70-percent vaccination target is achieved by the middle of this year,” Nograles said in a press briefing on Tuesday.

“Hopefully, starting March, if all goes well, we will begin with what we call the new normal to prepare the country to finally close the book on COVID-19, barring any other new variants that may come our way,” Dizon said in a meeting with the President in Malacañang on Monday.

The National Task Force Against COVID-19 and the Department of Health (DOH) are in the process of crafting the new normal roadmap, which is expected to be presented to President Rodrigo Duterte in early March, Dizon added.

“And this will really signal the return, hopefully, to a robust and very healthy growth in our economy that will bring back jobs, investments, and the return to normalcy of our industries such as tourism, which was heavily affected by COVID-19,” he said.

Dizon said the government would prioritize the inoculation of nearly three million unvaccinated senior citizens, who were among the most vulnerable to COVID-19, and children, especially those age 5 to 11, to allow them to return to school.

Another priority is increasing the number of people getting booster shots.

He said the government would also increase the vaccination rate in the regions to at least 70 percent and focus would be on Mimaropa (Mindoro, Marinduque, Romblon, Palawan) Bicol, Soccsksargen (South Cotabato, Cotabato, Sultan Kudarat, Sarangani, General Santos City) Caraga and Bangsamoro regions.

The government is targetting to vaccinate 90 million individuals by June and as of Feb. 14, the Philippines has 61.63 million fully vaccinated individuals, while another 9.16 million have received their booster doses, Dizon said.

Galvez said the figures were expected to double in the coming weeks as the government opens more vaccination sites across the country and as more vaccines come in.

Nograles also said the administration was preparing for Alert Level 1 for Metro Manila and other regions, and a big part of this would involve compliance of establishments with minimum public health standards.

Health Undersecretary Maria Rosario Vergeire said the environment has to be ready for the easing of restrictions to make it safe for people to go out.

“It’s not just the people, but also establishments, both public and private, should provide safe spaces for our people,” Vergeire said in the Palace briefing.

Health Secretary Francisco Duque III said placing Metro Manila under the lowest alert level would depend on the establishments’ compliance with the safety seal certification program, which affirms their adherence to the minimum public health standards set by the government.

“We will assess… if the safety certification is up to par by Thursday. Hopefully, by the first week of March we can already de-escalate to Alert Level 1,” Duque said in an interview with CNN Philippines.

Duque said the government was also observing how sorties and other gatherings related to the coming May elections affect the COVID-19 figures, admitting that the lack of physical distancing and crowding observed in campaign sorties were among the reasons why the Inter-Agency Task Force for the Management of Emerging Infectious Diseases decided to retain Metro Manila under Alert Level 2.

“[W]e’ll see in the next two weeks if cases will rise from the time the candidates held their proclamation rallies,” he added.

The DOH on Tuesday reported 2,010 new COVID-19 cases, the lowest daily tally so far this year.

Tuesday’s positivity rate was 10.4 percent, lower than the previous day’s 10.7 percent. This was based on 20,084 people tested on Sunday.

The DOH said there were 72,305 active cases or people who remain infected with the virus, of which 66,093 were mild.

Presidential Adviser for Entrepreneurship Joey Concepcion said he was hoping that Metro Manila and other areas of the country would be placed under alert level 1 by March to ensure that economic growth and recovery would continue.

“Hopefully by March, we open up because our first quarter depends on this,” he said at the Laging Handa briefing.

He noted that the summer period would begin in March, and this is when people usually go on vacations.

President Duterte also renewed his call to unvaccinated Filipinos to get the COVID-19 shot, saying massive vaccination was the only way to return to normalcy.