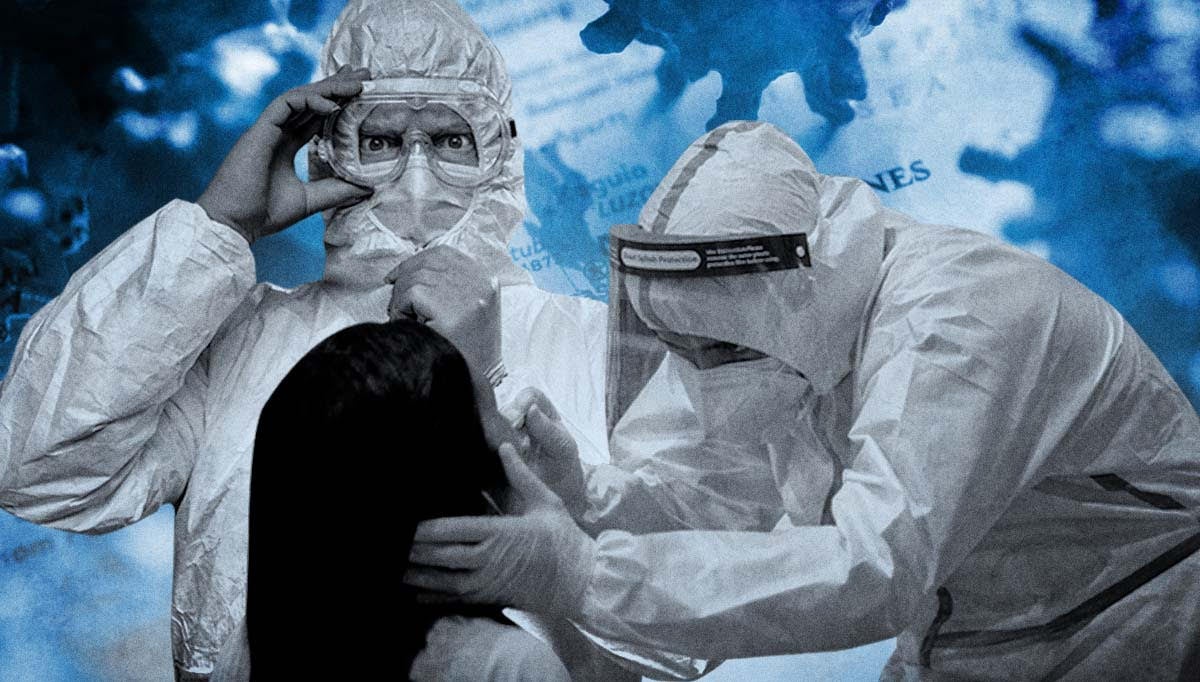 MANILA, Philippines — The COVID-19 pandemic has impacted countries across the globe for a couple of years now, yet amid the still increasing cases reported worldwide, some people still believe that the dreaded disease—which has so far taken the lives of 5,802,617 individuals globally—remains a mere “myth.”

A survey conducted by the YouGov-Cambridge Globalism Project found that people in some countries continue to view COVID-19, caused by the SARS-CoV-2 virus, as “a myth created by some powerful forces”—one of the most popular conspiracy theories about the current global health catastrophe.

These people, according to the results of the survey, believe that the virus does not really exist.

Where people believe COVID-19 is a myth

Out of 24 countries included in the survey, eight countries stood out for having the highest share of respondents who believe in the conspiracy theory.

The country where the conspiracy theory was most widespread was India, where 30 percent of total urban respondents admitted having the same perspective about the pandemic. 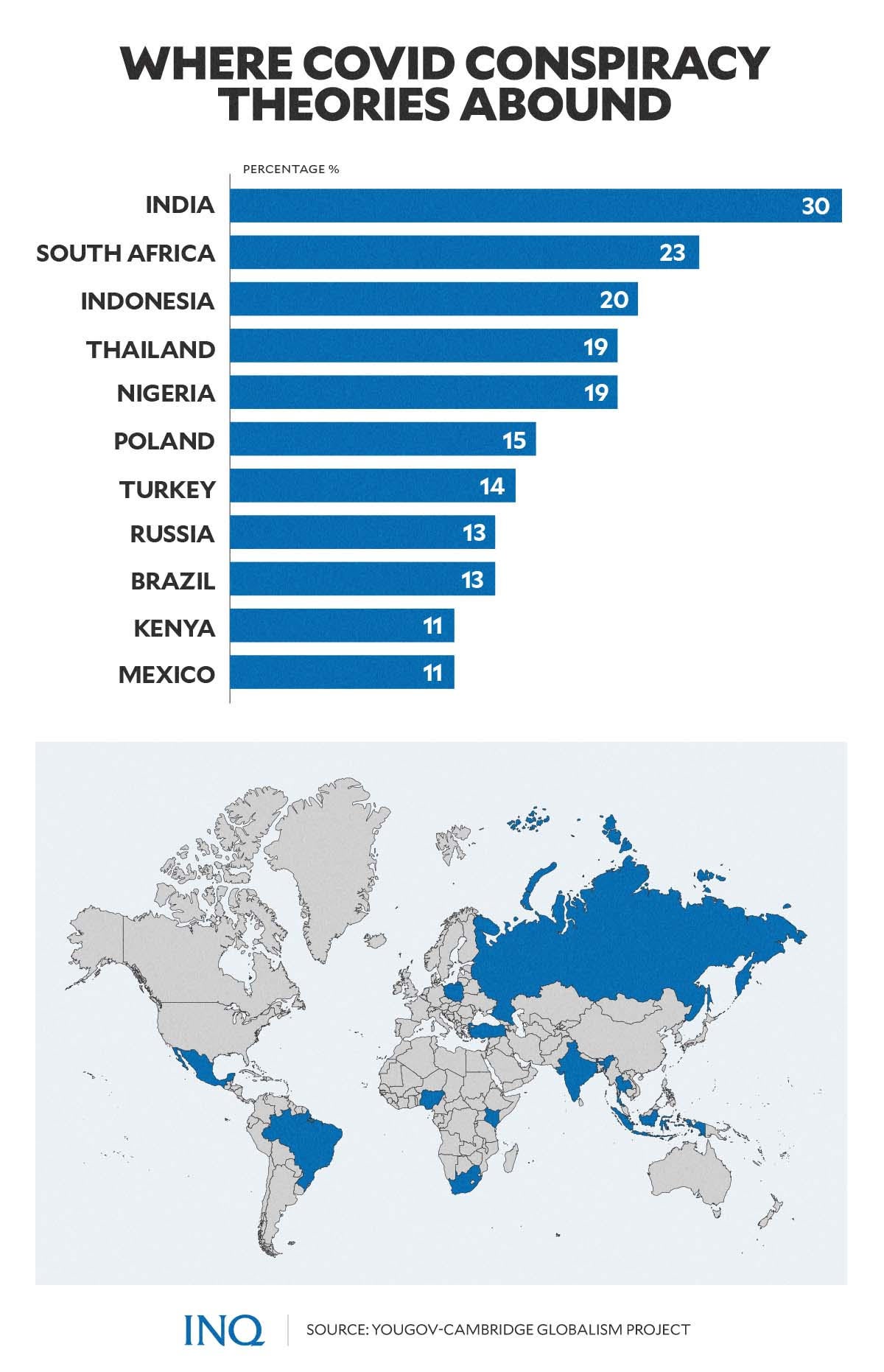 At least 23 percent of respondents from urban areas in South Africa have also professed to share the same view, while 20 percent and 19 percent of the online population from Indonesia and Thailand have agreed that COVID-19 is just a myth.

On the other hand, countries which had a low share of people believing in the conspiracy theory were:

“COVID-19 has thrown up a lot of complex topics which both society and the individual have had to come to terms with and react to,” said Martin Armstrong, data journalist from consumer company Statista, who analyzed the same survey. 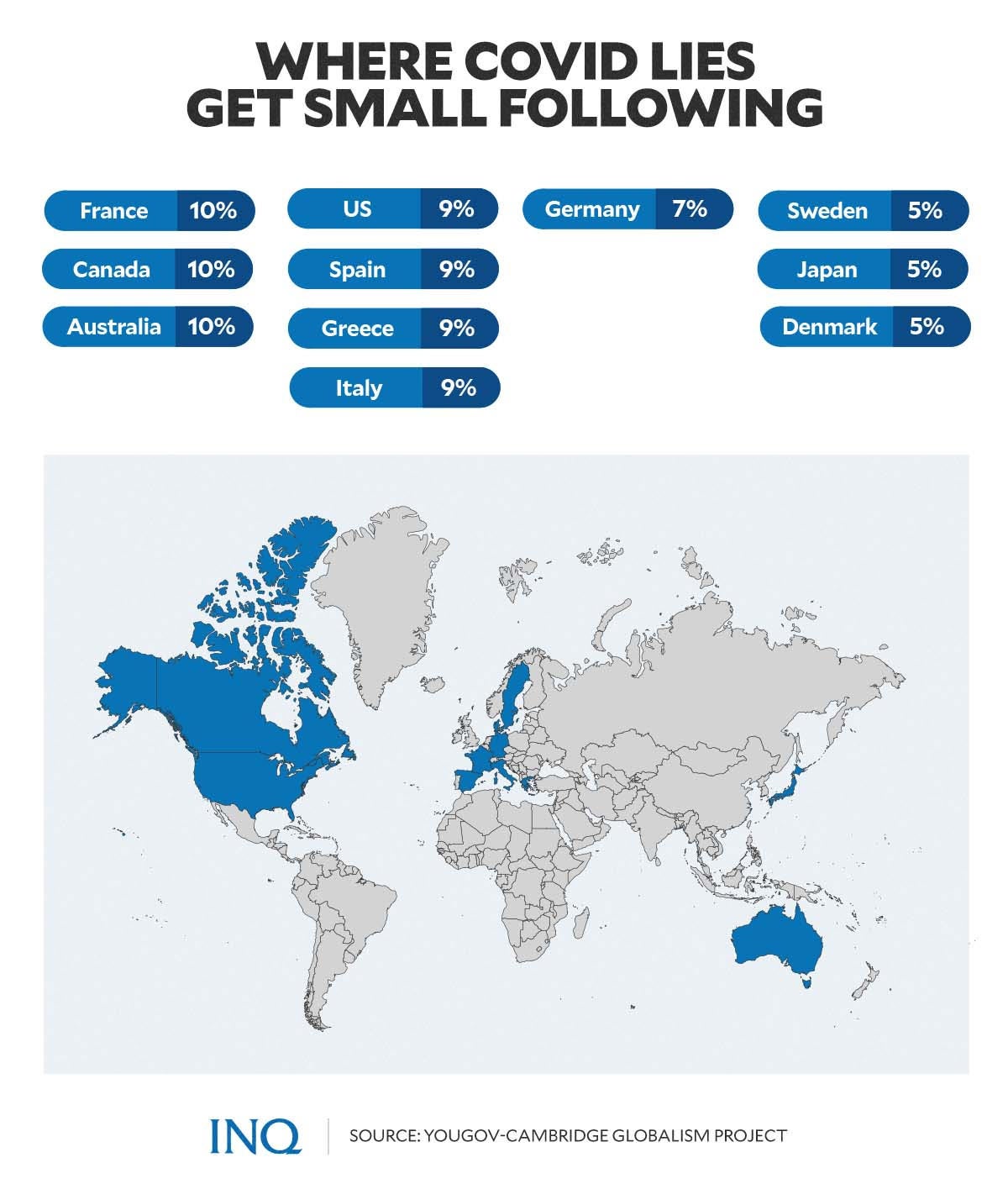 “Where these differences get away from the realm of ‘normal’ and understandable, however, is when people completely reject the reality of the situation, saying that the coronavirus is a myth—created by ‘some powerful forces’— and that the virus does not exist,” he added.

READ: Where People Believe Covid is a Myth

The survey, however, found that the average share of respondents across all 24 countries who believe in the theory “that the truth about the harmful effects of vaccines is being deliberately hidden from the public” was higher than the average for the theory about COVID-19 being a myth created by powerful people.

It was next to the top two conspiracy theories, which stated that:

The previous theory about the COVID-19 pandemic being a myth was on the lower end of the list.

Around 54 percent of the respondents from Kenya said the conspiracy theory about the COVID-19 vaccine was either “definitely true” or “probably true.”

Last year, as the Philippines began its COVID vaccine rollout, several conspiracy theories emerged and were immediately debunked by the health department, local and international health experts, as well as the World Health Organization (WHO).

A few months prior to the national vaccine rollout, confidence in vaccines was influenced by controversy over French company Sanofi’s Dengvaxia.

In late 2017, the Department of Health (DOH) halted its massive anti-dengue immunization program using Dengvaxia after its manufacturer Sanofi Pasteur said patients who got vaccinated but had no prior exposure to the virus could suffer severe symptoms.

Around 800,000 children had already been vaccinated by the time the program was stopped.

The Public Attorney’s Office filed complaints against health officials for the deaths of children allegedly caused by the anti-dengue vaccine, which is being widely used in other countries worldwide.

But in January 2019, DOH said no death was confirmed to have been directly caused by Dengvaxia. 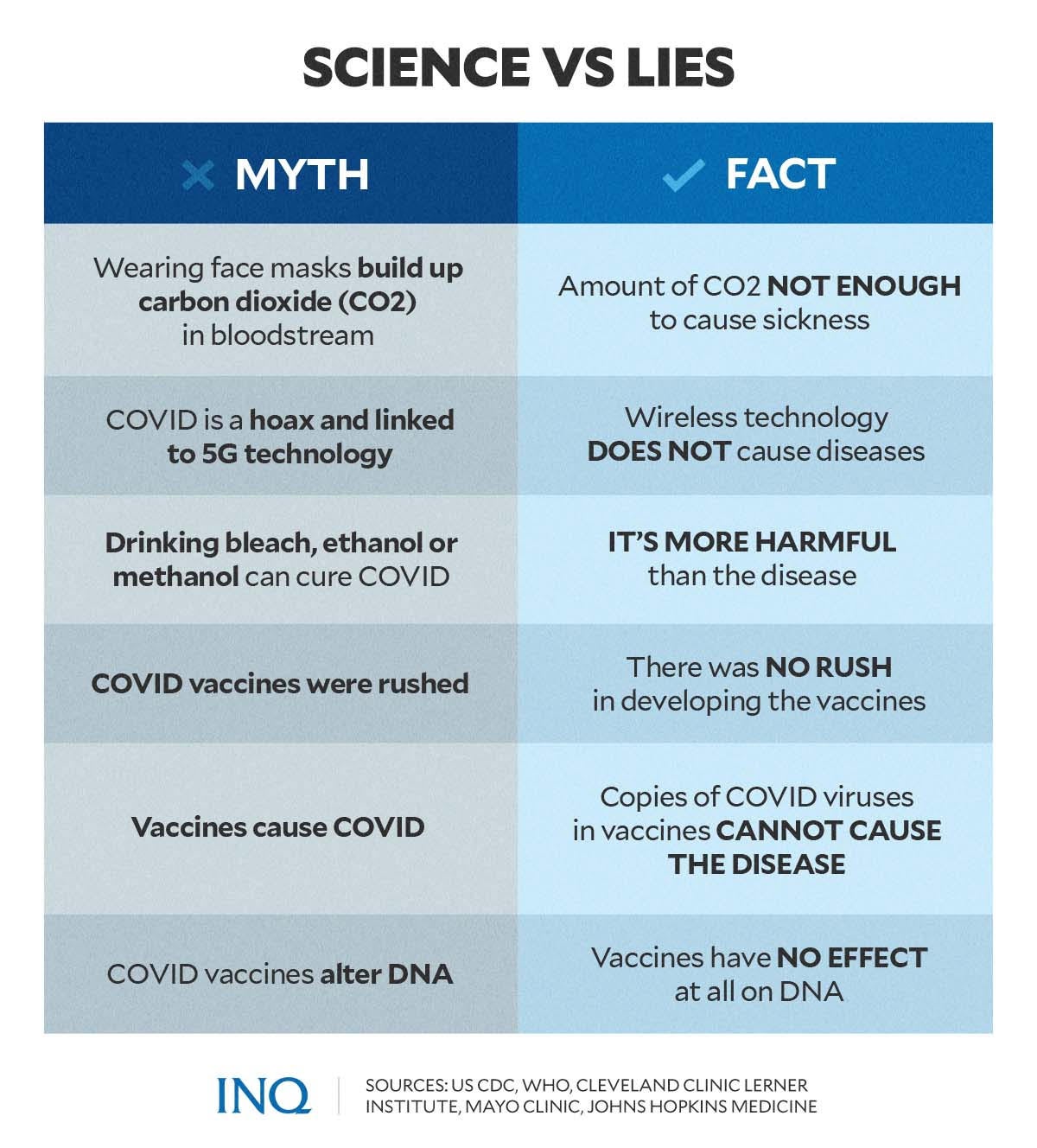 The Philippine government assured that the COVID vaccines are safe and that incidents similar to the Dengvaxia controversy will not happen again.

In the past two years, many rumors and conspiracy theories surrounding COVID-19 and COVID vaccines have circulated on social media and became popular among Filipinos online.

Myth: Wearing face masks will cause hypercapnia—a buildup of carbon dioxide (CO2) in the bloodstream—which could lead to suffocation of the lungs

Fact: The U.S. Centers for Disease Control and Prevention (CDC) explained in an article published by Reuters that while masks could cause CO2 buildup, it is “mostly tolerable to people exposed to it.”

The WHO also explained that prolonged use of face masks or medical masks, when properly worn, will not cause CO2 intoxication or oxygen deficiency.

Myth: COVID-19 is a hoax and is linked to fifth-generation (5G) technology installed in the country via “Mislatel towers”

Fact: The WHO has already previously clarified that there has been “no adverse health effect…causally linked with exposure to wireless technologies.”

Fact: The WHO warned the public against ingesting poisonous substances, including methanol, ethanol, or bleach.

“Drinking them can lead to disability and death. Methanol, ethanol, and bleach are sometimes used in cleaning products to kill the virus on surfaces—however, you should never drink them,” WHO said.

“They will not kill the virus in your body and they will harm your internal organs,” it added.

Myth: The development of COVID vaccine was rushed

Fact: According to Dr. Thaddeus Stappenbeck, chair of the Department of Inflammation and Immunity at Cleveland Clinic’s Lerner Research Institute, the different pharmaceutical companies did not rush the development of vaccines.

The vaccines undergo thorough clinical trials in several countries involving thousands of volunteers allowing the panel of vaccine experts to determine whether the vaccines are safe and effective against the COVID virus.

Myth: COVID vaccines can cause COVID-19

Fact: The US-based nonprofit organization Mayo Clinic and Johns Hopkins Medicine, and Cleveland Clinic explained that COVID vaccines do not cause COVID-19.

Vaccines do not contain SARS-CoV-2, or the virus that causes COVID-19.

According to researchers and medical experts, the viruses used for some COVID vaccines had already been inactivated or destroyed before their use in a vaccine formula.

Fact: The mRNA used in Pfizer-BioNTech and Moderna’s vaccine will not change or alter a person’s DNA. It only enters cells to make a protein that triggers an immune response. However, it does not enter nor affect the nucleus of the cells where the DNA is located.

“What mRNA is, it’s the instructions to the body to make a protein. Most vaccines are developed by actually giving a protein or giving a small, tiny component of the germ we’re trying to vaccinate against. And this is a new approach where instead of giving that tiny little part, instead, we just give the instructions to our bodies to make that tiny little part, and then our natural immune system responds to it,” she added.

Myth: Getting COVID-19 vaccines will lead to infertility

According to them, vaccines against the SARS-CoV-2 virus are safe for pregnant women.