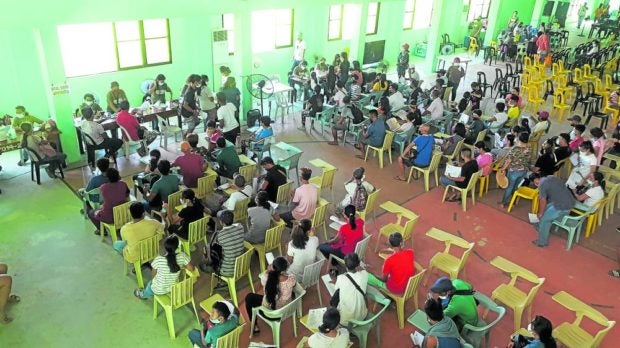 File photo taken on 2020 shows residents of Hamtic, Antique at the  COVID-19 vaccination site at the University of Antique during the government’s three-day national vaccination drive in December 2021. (PHOTO FROM DEPARTMENT OF HEALTH-WESTERN VISAYAS FACEBOOK PAGE)

The figure, however, is still way off the government’s target of five million doses.

The vaccination drive, initially set from February 10 to 11, was extended until February 18 to immunize more people.

(As of yesterday, we have vaccinated 1.5 million during the Bayanihan, Bakunahan or NVD.)

To date, 61.4 million individuals are fully vaccinated against COVID-19.  Some nine million received their booster dose.

(The number of fully vaccinated people is now at 61.4 million then there are nine million who got their booster shot.)

Cabotaje said that of the 9.4 million target in the A2 priority group, which is composed of senior citizens, 2.5 million remain unvaccinated.

Meanwhile, out of the 14.5 million target in the A3 priority group, or persons with comorbidities, 222,000 have not received a single dose yet.