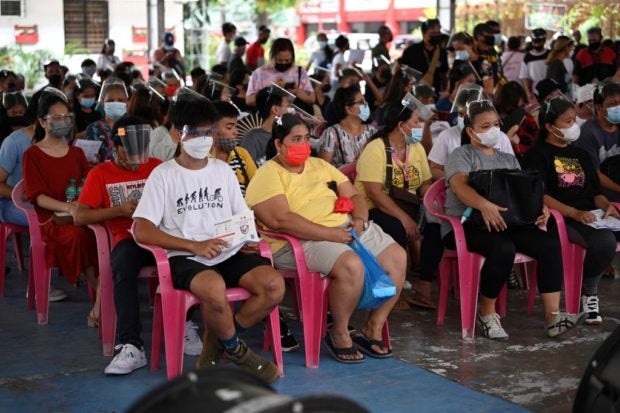 Teenagers wait with their parents for their turn during an innoculation drive of young people aged 12 to 17 against the Covid-19 coronavirus, at a school in Taguig City, suburban Manila on November 10, 2021. (AFP)

MANILA, Philippines — The government is targeting to administer six million COVID-19 vaccine doses in the third national vaccination drive slated on February 10 and 11.

(Our advocacy and information drive on vaccines is ongoing and in fact, we have a National Vaccination Day Part 3 on February 10 to 11 where we aim to administer two million primary doses and four million booster shots.)

Año said that one million of the target six million doses will be administered in Metro Manila.

(In Metro Manila alone, our target is to inject one million primary series and booster shots.)

Ano said employers have been urged to allow employees to skip work to get immunized.

(This is a work day but we talked to employers to allow their employees to get vaccinated. In fact, they should be given incentives.)

The government kicked off the first national vaccination drive, dubbed Bayanihan, Bakunahan, on November 29 to December 1 with some areas extending until December 3.

The second Bayanihan, Bakunahan started on December 15 with some areas beginning at a later date as they reel from the devastation of Typhoon Odette, the strongest tropical cyclone to hit the country in 2021.