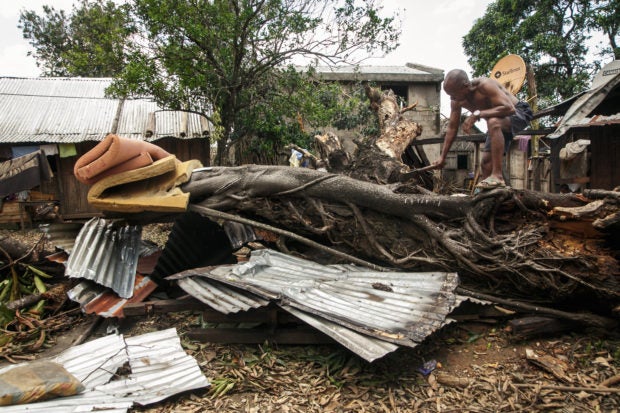 Jocelyn Germain (56) cuts down a tree with an axe that fell on his son’s house following the passage of cyclone Batsirai on February 8, 2022 in Irondro. AFP

The storm left 120 people dead, mainly on the east coast of the Indian Ocean island nation, which took the hardest hit.

“For the moment, the initial evaluations undertaken are very alarming. We’re talking about nine out of 10 homes damaged by the cyclone, especially around Mananjary,” said Martin Marin, a French Red Cross logistics officer.

He spoke to AFP as the Red Cross was loading two tonnes of equipment onto a French military plane to deliver from the Indian Ocean island of Reunion to Madagascar.

Doctors without Borders (MSF) said in a statement that their teams had visited the town and found it “largely destroyed”.

“The hospital is no longer functioning, five health centers are completely destroyed in the area and the roofs of 35 other structures have been blown off. The hospital patients have been evacuated to a clinic opened urgently to receive them,” said MSF logistics officer Joaquin Noterdaeme.

“The state of the roads is getting worse as we go, and many of them are still being cleared,” he said.

“The roads are unstable, sometimes with a deep hole under the asphalt, and can collapse at any time.”

Nosy Varika, about 100 kilometres (65 miles) north, is only accessible by sea. The town’s hospital was destroyed, and electricity has yet to be restored, he added.

The national disaster management agency BNGRC said the majority of deaths were in Ikongo district, also near the east coast.

About 125,000 people were in need of aid after Batsirai struck one week ago, the agency said.

Madagascar is one of the poorest countries in the world. Some 42 percent of children suffer from chronic malnutrition, even without a natural disaster.