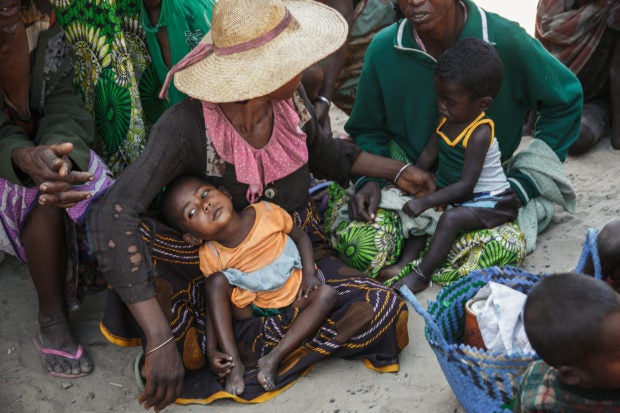 Beneficiaries wait their turn to be consulted by Doctors Without Borders (MSF) mobile clinic medical staff in the village of Befeno, Commune Marovato, on September 2, 2021. AFP

PARIS — Global warming played only a minimal role in the famine that has hit Madagascar, according to a new study published Thursday which contradicts a UN description of the crisis as a “climate change famine”.
The southern Indian Ocean island off Africa has been hit by its worst drought in four decades.
The UN’s World Food Program said last month that more than 1.3 million people there were considered to be in a food security crisis or emergency as a result.
In June the WFP said Madagascar is the “first country in the world that is experiencing famine-like conditions as a result of the climate crisis”.
READ: Desolate villages face famine in Madagascar drought
Last month Madagascar’s President Andry Rajoelina said: “My countrymen are paying the price for a climate crisis that they did not create.”
But the findings of the new study, published on Thursday by the World Weather Attribution (WWA) network of scientists, do not back up the theory that Madagascar’s famine was induced by climate change.
According to the study by the WWA, which has pioneered ways to speedily link extreme weather events to climate change, the rainy seasons of both 2019/20 and 2020/21 saw just 60 percent of normal rainfall across southern Madagascar.
“This lack of rain over the 24 months from July 2019 to June 2021 was estimated as a 1-in-135 year dry event, an event only surpassed in severity by the devastating drought of 1990-92,” the study said.
“Based on observations and climate modelling, the occurrence of poor rains as observed from July 2019 to June 2021 in Southern Madagascar has not significantly increased due to human-caused climate change.”

Those findings correspond with the results of a report released in August by the UN’s Intergovernmental Panel on Climate Change, which indicated that global warming is not expected to affect levels of drought in Madagascar until it reaches two degrees Celsius above the pre-industrial era. At present the increase is around 1.1 C.
“Our results are not surprising, they are very much in line with previous studies,” Friederike Otto of Oxford University’s Environmental Change Institute told AFP.
“I was more surprised by the UN branding this as clearly as climate change induced,” she added, saying “extreme events are always a combination of things”.
READ: Madagascar prays for rain as UN warns of ‘climate change famine’
“It’s really important not to automatically assume that every bad thing that is happening is because of climate change, it’s not true.”
Climatologist Robert Vautard, head of France’s Pierre-Simon Laplace Institute and another of the study’s authors, agrees.
In the Madagascar case “if there is any influence by climate change it is minimal,” even too small to be detectable, he told AFP.
According to the WWA report, “poverty, poor infrastructure and dependence on rain-fed agriculture, combined with natural climate variability, are the main factors behind the Madagascar food crisis, with climate change playing no more than a small part.”
However no one is questioning the seriousness of the situation.
“They have been hit by a major drought two years in a row, with people forced to leave their land. It’s a dramatic situation,” said Vautard.
“And since we are relatively confident that droughts will increase in Madagascar at least from +2C onwards, we must still be concerned and try to limit climate change,” he continued.
Maarten van Aalst, director of the International Red Cross Red Crescent Climate Centre, said that the events in Madagascar show that “in many cases we are not even prepared for today’s climate”.
“Addressing the vulnerability in the region and improving the living conditions of the population remains critical.”
ADVERTISEMENT
FEATURED STORIES
NEWSINFO
Rooftop shooter kills 6 at July 4 parade in Chicago suburb
NEWSINFO
Escudero raises ‘unique legal quandary’ over Marcos’ first veto
NEWSINFO
Bongbong Marcos holds first Cabinet meeting