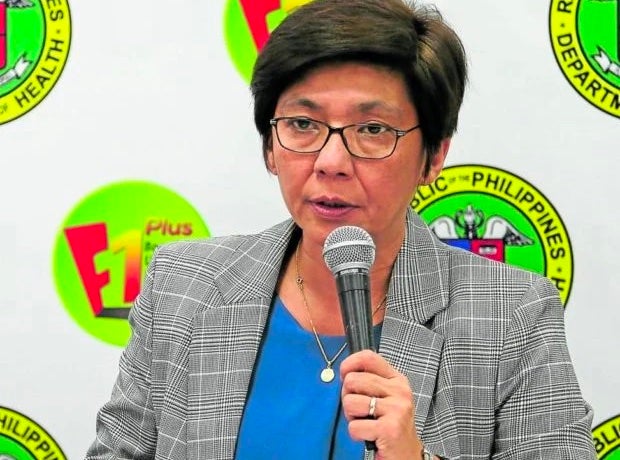 MANILA, Philippines — The government will ramp up its third national vaccination drive, which will include at-home inoculations against COVID-19 to more people so that the country could move closer to Alert Level 1, Health Undersecretary Maria Rosario Vergeire said on Saturday.

A high vaccination rate was one of the conditions set by the government prior to a declaration of Alert Level 1, the most relaxed pandemic restriction, which would be considered the “new normal,” according to Vergeire.

This means a vaccination rate of more than 70 percent of the targeted individuals in all regions, she said.

“The government is preparing for us to transition into this ‘new normal’ that we call. So, our countrymen need to have the same mindset,” Vergeire said during Saturday’s Laging Handa briefing.

Secretary Carlito Galvez Jr., the chief implementer of the National Task Force Against COVID-19, last month said the administration was aiming to fully vaccinate 90 million of the country’s 110 million population before President Rodrigo Duterte steps down on June 30.

According to the Department of Health (DOH), 60,004,959 individuals have been fully vaccinated as of Feb. 7.

Government statistics monitored by the Inquirer show that 68.65 percent of the nearly 14 million population of Metro Manila have been fully vaccinated and 17.68 percent have received their booster shot as of Feb. 1.

Vergeire said the Feb. 10 to Feb. 11 mass vaccination campaign reached another 1.3 million individuals nationwide. This is way below the target of 5 million and so the drive will continue daily until Feb. 18, she said.

“Our teams were mobilized already to really look for and to visit houses in other areas that have a low vaccination rate,” Vergeire said.

She did not identify these areas, but Health Undersecretary Myrna Cabotaje earlier said the Bangsamoro Autonomous Region in Muslim Mindanao and the Soccsksargen region (South Cotabato, Cotabato, Sultan Kudarat, Sarangani, and General Santos City) were among those with a low vaccination count.

Vergeire said that in addition to higher vaccination rates, there should also be minimal to low-risk case trends.

This means the average daily attack rate (Adar) should be less than 7, plus a “low risk” healthcare utilization rate of less than 50 percent of intensive care units, isolation and ward beds, and mechanical ventilators.

Adar refers to the number of infections per 100,000 population.

Private and public spaces must be able to adhere to safety protocols, she added.

But what is more important in shifting to a new normal is for people to practice self-regulation, making it part of their habit to always adhere to minimum public health standards, she said.

Metro Manila and the provinces of Batanes, Bulacan, Cavite, Rizal, Biliran, Southern Leyte and Basilan had been placed under alert level 2 until Feb. 15.Ready for alert level 1?

Asked if the sprawling metropolis was ready for alert level 1, Vergeire said the case trends in the capital region classified it as a “moderate risk” area, even though its hospitals are not full of COVID-19 patients. In addition, its Adar is 10.5, she said.

The DOH also wants to see establishments and workspaces comply with safety protocols, she said, adding that the Safety Seal would be an important gauge in determining if restrictions could be eased in Metro Manila, Vergeire said.

The Safety Seal, issued by the government, attests to an establishment’s strong adherence to health measures.

All the 17 mayors across the Metro Manila (also known as the National Capital Region, or NCR) were ready for a lowering of the alert level, Romando Artes, the officer in charge and general manager of the Metropolitan Manila Development Authority (MMDA), said on Saturday.

He said in an interview with dzMM “Teleradyo” that the MMDA was “always prepared for any kind of declaration.”

Based on their monitoring of the current state of restrictions, various establishments across Metro Manila had been “strictly enforcing” minimum health protocols, such as physical distancing and masking.

In a separate interview with dzBB radio, Artes said the MMDA and the secretariat of the Metro Manila Commission (MMC) had been “getting the consensus” of all the region’s mayors on whether they wanted to retain the current alert level status or to lower it.

The MMC is the governing board and policy-making body of MMDA made up of all the 17 mayors in Metro Manila. It approves all metro-wide plans and rules and regulations.

It is currently chaired by Parañaque City Mayor Edwin Olivarez.

Dr. Maricar Limpin, president of the Philippine College of Physicians, said the government should not rush into lowering the alert level before all the important health data showed that it would be safe, particularly the vaccination rate and the positivity rate—the number of people found positive for the coronavirus in tests—which was 14.3 percent on Saturday.

As Vergeire indicated, the vaccination rate should be at least over 70 percent, but Limpin said this should be for all qualified age groups, including children 5 to 11 years old. The number of booster doses also should be considered, she added.

“Hopefully, before we shift to alert level 1, we must first contain the number of cases we have been recording the past days ranging from 3,000 to 4,000, which are still high,” Limpin told the Inquirer by phone.

She said the authorities should “slow down” in deciding to ease restrictions.

“There is nothing to lose if we would be discerning first with our current situation,” Limpin said. “Our prayer is that the alert level here in NCR would be maintained at Alert Level 2.”

“Now, if we are thinking about the economy, maybe it would be best for all of us to hold our horses before we shift to alert level 1, and we should take into consideration the data we have,” Limpin said.