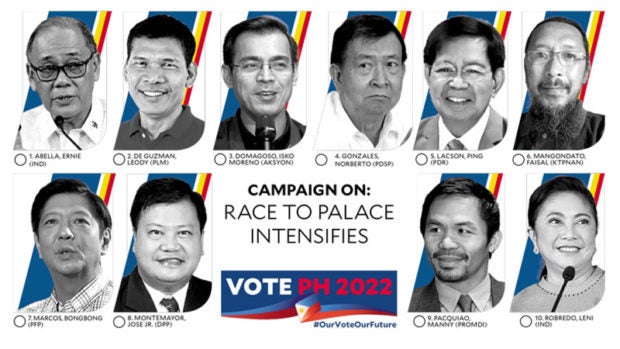 MANILA, Philippines – Here are some of the highlights of the week since the official presidential campaign began last Tuesday, Feb. 8.

■ Feb. 8 – Held proclamation rally with running mate, former Rep. Walden Bello, at Bantayog ng mga Bayani in Quezon City, getting there on a caravan with his supporters that started from De Guzman’s home in Cainta, Rizal.- Rally pushed through despite lack of permit from the Commission on Elections, where one official called him out for the apparent “violation”; permit originally applied for was for Amoranto Stadium; said he and his organizers were ready to face the consequences

■ Feb. 9 – Appeared with Bello at the weekly Pandesal Forum also in Quezon City, where they both expounded on their socioeconomic, political, labor and environmental platforms.

■ Feb. 12 – Met the press at the weekly Annabels Media Forum also in Quezon City; talk mostly centered on need for a government that will prioritize the working class.

■ Feb. 11 – Motorcade in the cities of Navotas and Malabon with Ong and the three Aksyon senatorial candidates.

“We already gave them the chance. My question to you, my countrymen, after 39 years: how are you all doing?” (Feb. 8 proclamation rally speech)

Key message:“What do you think is the No. 1 problem of our country? It’s the government. And the solution lies in the face of the problem itself. It is called government, good government.’’ (Feb. 8 proclamation rally speech)

■ Feb. 7 – Held a motorcade in Bulacan province; in Baluiag town, met with officers and members of the Bulacan Chamber of Commerce and Industry.

■ Feb. 10 – Joined a rally in Valenzuela City hosted by the ruling Gatchalians, who declared their full support for the Marcos-Duterte team.

(It was also on this day that the Commission on Elections dismissed three more petitions filed by martial law victims seeking his disqualification from the presidential race.)

■ Feb. 11 – Held a motorcade around Cavite province with Gov. Jonvic Remulla, who promised him more than 800,000 votes from the province.

■ Feb. 12 – Returned to Cavite province, this time for a motorcade in Silang town

– Attended a prayer rally of the charismatic Catholic group El Shaddai in Parañaque City, where televangelist Bro. Mike Velarde raised his hand and introduced him as “our presidential candidate.” Key message:“Unity has been my advocacy because I believe that unity is the first step to survive this crisis, this pandemic, and this economic crisis brought about by the pandemic.” (Feb. 8 proclamation rally speech)

■ Feb. 8 – Launched presidential campaign in hometown of General Santos City; his running mate, Buhay Rep. Lito Atienza, was unable to join him because of a sprained ankle.

– Among Pacquiao’s senatorial lineup, only Eastern Samar Gov. Lutgardo Barbo and broadcaster Raffy Tulfo were present at the proclamation rally.

■ Feb. 9 – Visited Pacman Village in Alabel, Sarangani, which is a housing project for victims of the 2013 Supertyphoon “Yolanda” (international name: Haiyan); accompanied by Barbo and Tulfo.

■ Feb. 11 and Feb. 12 – Canceled scheduled consultations and community forums with jeepney drivers, vendors, barangay health workers and other sectors that were supposed to be held in Makati City, Manila, San Juan City and Mandaluyong City.

– Met with some congressmen (names and number not disclosed by campaign team) for a closed-door meeting on Feb. 11 in General Santos City

– Received statement of support from local Anduyog party of the Andayas, who seek to regain power from the Villafuertes

“We will put the government in slippers. The marginalized will be at the center of our governance.’’ (Feb. 8 proclamation rally speech)