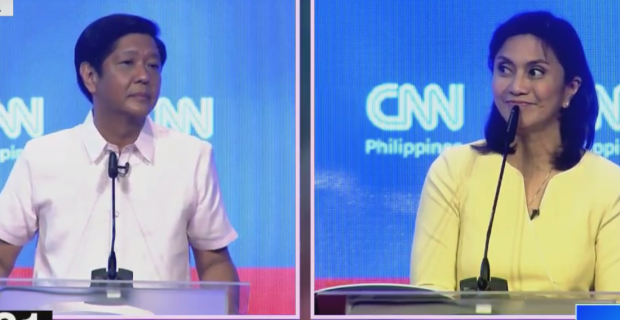 FILE PHOTO: Then vice presidential aspirants Bongbong Marcos and Leni Robredo talk about the alleged ill-gotten wealth of the Marcos family. SCREENGRAB FROM THE CNN LIVESTREAM

MANILA, Philippines — A debate among presidential candidates is not a meaningless argument as it is also not tantamount to a brawl.

This was the assertion of Atty. Barry Gutierrez, spokesperson Vice President Leno Robredo, as the camp of Ferdinand Marcos Jr. shunned participation of their bet to presidential debates.

“I think it’s completely disingenuous to try to portray this as some kind of principled stand. A debate is not an argument. Hindi siya away [It’s not a fight],” Gutierrez said in an ANC interview.

Gutierrez also pointed out that a presidential debate serves as a venue where candidates can articulate their platform and advocacies as well as address issues related to their application to the elective government position.

(The Filipino people will have the chance to see them side-by-side, who will shine, who has a clear vision and plan for the country, who can handle the pressure. Because that’s what a president will do.)

READ: Bongbong Marcos camp: It should be presidential interview, not debate

Guiterrez then quipped that “there are only so many excuses” that one can give to “dodge” engaging in political debates.

“I have to admit, he’s gotten pretty creative at trying to explain a way why his candidate keeps dodging all these public fora,” Gutierrez said, referring to Atty. Vic Rodriguez, the spokesperson of Marcos Jr.

“We always felt that from the start that they would try to dodge the debates,” Robredo’s spokesperson said.

The presidency is a “pressure-packed job,” according to Guiterrez.

“It’s not just about clarity of plans—although that is such a huge thing—it’s also being able to perform under pressure. Because the presidency is a pressure-packed job. So, para sakin somebody who avoids pressure, who avoids conflict, who avoids challenge is someone na hindi mo talaga maaasahang pagka-pangulo [that we can’t trust the presidency with],” he said.

He pointed to how Robredo dealt with critics during her vice presidency.

“VP Leni, for the last 6 years, has been put through really a wringer in terms of the pressure she has been put under. Bashers, trolls, hecklers, and she has not stood down at any point,” he said.

Guiterrez then urged Filipinos to use presidential debates, interviews, and forums as a way to know the true character of each candidate.

In January, Marcos Jr. declined an interview with GMA News’ Jessica Soho, accusing the veteran and award-winning broadcast journalist of being biased against the Marcos family. GMA News strongly denied this accusation.

Marcos Jr. also did not attend the presidential forum organized by the Kapisanan ng mga Brodkaster ng Pilipinas (KBP) due to a conflict in schedule.

Marcos Jr. so far participated in the forum organized by DZRH as well as the separate one-on-one interviews with Boy Abunda and Korina Sanchez.