Quiboloy wanted poster not linked to PH elections – US Embassy 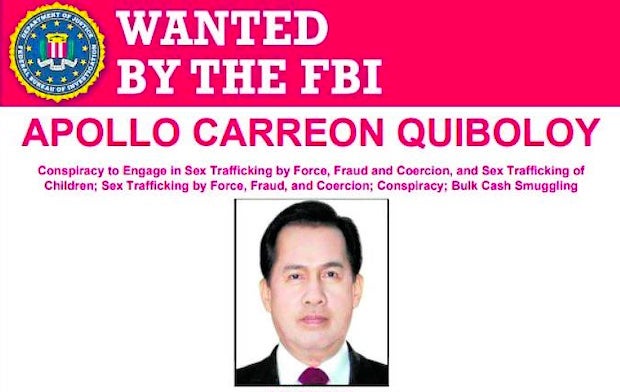 DELIVER THIS ‘SON OF GOD’: The US Federal Bureau of Investigation includes Apollo Quiboloy, leader of the Davao-based religious sect Kingdom of Jesus Christ, on its most wanted list for a variety of offenses in the United States, including child sex trafficking. (FBI PHOTO)

MANILA, Philippines — The US Embassy in Manila said on Tuesday that the release of a wanted poster for Apollo Quiboloy, President Rodrigo Duterte’s close friend and spiritual adviser, had nothing to do with the May elections.

“The FBI’s (Federal Bureau of Investigation) release of a wanted poster for Kingdom of Jesus Christ founder Pastor Apollo Quiboloy follows a multiyear effort by law enforcement,” it clarified in a statement.

“It is unrelated to the Philippines’ ongoing presidential election campaign,” it added.

The embassy issued the statement after one of Quiboloy’s lawyers, Ferdinand Topacio, said the release of the FBI wanted poster was ill-timed as it happened just before the start of the campaign period.

Topacio noted that the US federal grand jury indictment and issuance of an arrest warrant for his client happened in November.

The controversial sect leader, who earlier called himself the “Appointed Son of God,” said that the charges against him were lies made up by the “Devil.”