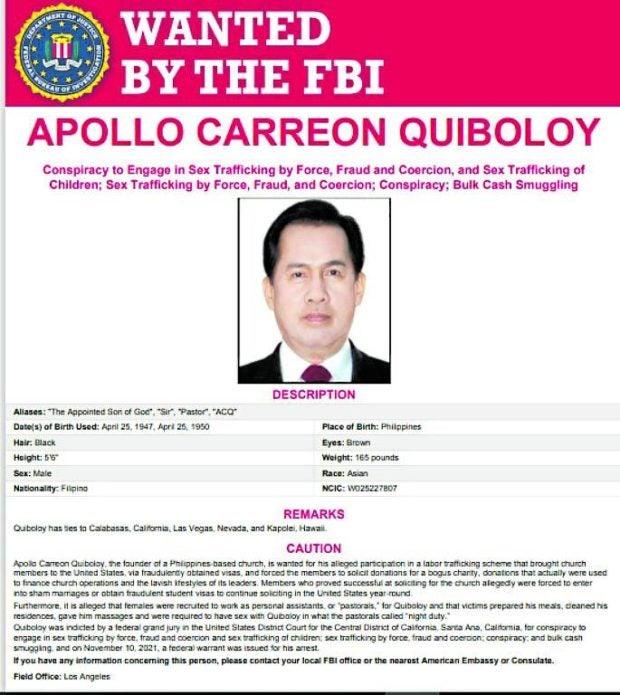 DELIVER THIS ‘SON OF GOD’: The US Federal Bureau of Investigation includes Apollo Quiboloy, leader of the Davao-based religious sect Kingdom of Jesus Christ, on its most wanted list for a variety of offenses in the United States, including child sex trafficking. (FBI PHOTO)

MANILA, Philippines — Apollo Quiboloy, President Rodrigo Duterte’s spiritual adviser, has been officially declared as one of the most wanted suspected sex traffickers by the United States.

Separate wanted posters were issued for Teresita Dandan and Helen Panilag, both top officials of the religious sect that Quiboloy founded in 1985, Kingdom of Jesus Christ, The Name Above Every Name (KOJC).According to US federal authorities, Quiboloy, Dandan, and Panilag are all in the Philippines.

There was no comment on Saturday from Dr. Marlon Rosete, Quiboloy’s spokesperson.

But in a statement on Friday, Quiboloy branded all accusations against him as lies instigated by the “Devil.”

Quoting from a Bible verse, Romans 8:35, he said: “If we talk about persecution and accusations, Satan has hurled everything at me. But was the diamond shaken? Was the gold shaken? No!” he said.

Quiboloy said he never defended himself against the accusations.

Quiboloy has no wife and children, according to his loyal followers. What he has are “spiritual wives,” according to former church members who filed a case against him.

“(I)t is alleged that females were recruited to work as personal assistants, or ‘pastorals,’ for Quiboloy and that (the) victims prepared his meals, cleaned his residences, gave him massages and were required to have sex with Quiboloy in what the pastorals called ‘night duty,’” according to the FBI wanted poster.

“If you have any information concerning this person, please contact your local FBI office or the nearest American Embassy or Consulate,” it said.

The FBI said Quiboloy is also known by his “aliases” as “the appointed son of God,” “Sir,” “Pastor,” and “ACQ.”

He was allegedly involved in a “labor trafficking scheme” that brought members of his church to the United States on “fraudulently obtained visas” and forced to solicit donations for a bogus charity.

It said the money they collected were spent for the operations of KOJC and for the “lavish lifestyles of its leaders.”

PRAYING OVER President Duterte’s spiritual adviser Apollo Quiboloy has endorsed presidential candidate Ferdinand Marcos Jr. and his running mate, Davao City Mayor Sara Duterte. He is shown in this Feb. 1 photo praying over the mayor and two senatorial bets, former Sen. Jinggoy Estrada and former presidential spokesperson Harry Roque, as they prepare for a caravan from Davao to Manila. —SCREENGRAB FROM INQUIRER.NET

“Members who proved successful at soliciting for the church allegedly were forced to enter into sham marriages or obtain fraudulent student visas to continue soliciting in the United States year-round,” the FBI said.

Malacañang was silent on the FBI move and the charges against Quiboloy.

Presidential candidate Ferdinand Marcos Jr. and his running mate Sara Duterte, the President’s daughter and Davao City mayor, did not respond to requests for comment.

Quiboloy endorsed the Marcos-Duterte team and its senatorial slate during the sendoff ceremony for their “Mahalin Natin Ang Pilipinas Ride” national caravan, which was held at the compound of his church in Davao City earlier this month.

Justice Secretary Menardo Guevarra on Saturday said the Department of Justice (DOJ) has not received an official extradition request for Quiboloy and his associates from American authorities.

He said yielding any Filipino national to a foreign authority should not be done motu proprio, or automatically, by the Philippine government. It must be coursed through the proper diplomatic channels, he said.

“The process is governed by the Philippine-US Extradition Treaty. The US State Department makes the extradition request,” Guevarra told reporters.

The Department of Foreign Affairs (DFA) would review the “sufficiency” of the extradition request before recommending it to the DOJ, which would then file a formal petition for extradition before a Philippine court based on the US government’s request.

“The rest of our judicial process, including appeals, follows,” Guevarra said.

Extradition should be a “summary proceeding” because Philippine courts are “not supposed to be trying the US criminal charges here,” he explained.

There were extraditions cases that reached the Supreme Court but they were ultimately implemented, he said.

Asked if the DOJ would issue a travel bulletin to monitor Quiboloy’s movement, Guevarra said the DOJ would study the legal basis for that as there was still no extradition request from the United States.

“I’m sure the FBI knows where Quiboloy is,” the justice secretary said. “I’m also sure that the FBI knows the proper legal procedure to enable the US justice system to acquire jurisdiction over (Quiboloy).”

Heather Fabrikant, the spokesperson for the US Embassy in Manila, declined to comment on Quiboloy’s possible extradition, saying the FBI was the proper agency to answer questions regarding that matter.

—WITH REPORTS FROM LEILA B. SALAVERRIA and GERMELINA LACORTE

Palace hands off FBI raid of Quiboloy’s church in US

IN THE KNOW: Who is Apollo Quiboloy?