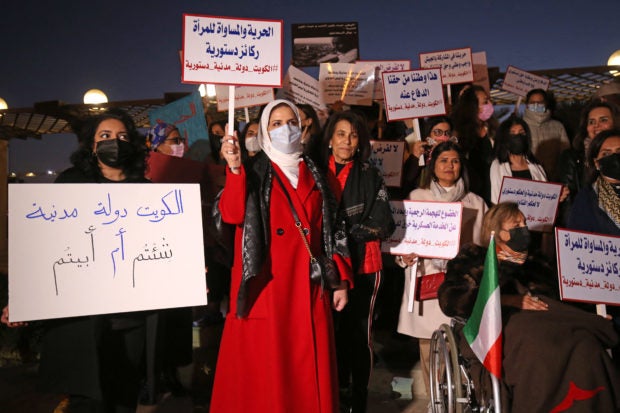 Women activists rally in support of their right to exercise activities, outside the National Assembly in Kuwait City on February 7, 2022. AFP

KUWAIT CITY — Dozens of Kuwaiti women staged a protest Monday against the suspension of a women’s yoga retreat deemed “indecent” by conservatives — a move that sparked controversy in the small emirate.

Event organizer Eman al-Husseinan announced the suspension of the retreat last Thursday, stating she had not received a permit from the authorities, a day after MP Hamdan al-Azmi tweeted to denounce the retreat as “dangerous”.

“This is not about sports, although that is important,” said activist and university professor Ibtihal al-Khatib, who attended the demonstration in Kuwait City’s Erada Square, in front of the parliament building.

“The important point is that if we give in, we will see much more regression,” she said.

Unlike most Gulf countries, Kuwait is known to have an active political scene, with MPs regularly challenging the ruling authorities.

Women in the square carried placards denouncing the “exploitation of women’s issues” by parliament and government, and rejecting the “regime of fatwas” (religious edicts) and “guardianship of women”.

Rights activist Hadeel Buqrais told AFP: “What we want the government and MPs to understand is that we do not accept the exploitation of women’s issues and their freedoms for the settlement of political scores.”

In a video posted on social media, the event’s organizer decried a smear campaign in local media.

In his tweet, Azmi had called on the interior ministry to put an end to “practices that are alien to our conservative society”.

Though several Kuwaiti women have previously held government posts and parliament seats, women failed to win any seats in elections to the last parliament, which is dominated by the Islamist opposition.

Kuwaiti girls use martial arts to counter bullies and violence