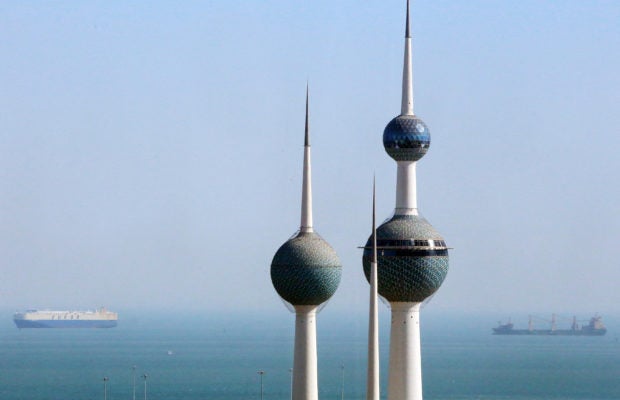 A picture taken on October 11, 2021 from Kuwait City’s Al-Hamra highrise shows the landmark Kuwiat water towers as cargo ships, in the background, cross the Gulf waters off the shore of oil-rich Gulf emirate. AFP

KUWAIT CITY — Human Rights Watch on Thursday urged Kuwaiti authorities to release a transgender woman who was sentenced to two years in prison for “imitating the opposite sex”.

Maha al-Mutairi, 40, has been arrested several times before on the same grounds, her lawyer, Ibtissam al-Enezi told AFP, adding that the latest conviction — which included “misusing phone communication” — was by far “the harshest”.

“Such laws violate the rights to free expression, privacy and non-discrimination under Kuwait’s constitution and international law,” HRW said in a statement.

“The authorities should immediately release her and quash the conviction.”

Kuwaiti law criminalizes “imitating the opposite sex”. HRW says transgender women in the Gulf emirate have reported multiple forms of abuse by police while in detention.

Enezi said Mutairi was calling to be moved to a women’s prison after she was placed in a cell designated for transgender detainees in a men’s jail.

An appeals hearing is scheduled for October 31. “We have submitted a request to stop the implementation of the sentence… and we expect that she will be released,” said Enezi.

“Kuwaiti authorities should immediately reverse her conviction and allow her to live safely as a woman,” she said.