SWS: 45% of Filipinos think it's dangerous to print or air anything critical of the administration | Inquirer News
Close
menu
search

SWS: 45% of Filipinos think it’s dangerous to print or air anything critical of the administration 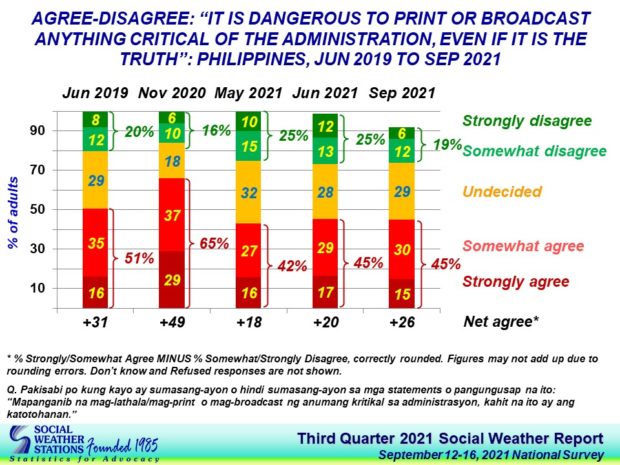 MANILA, Philippines — Nearly half (45%) of Filipinos believe it is dangerous to print or broadcast anything about the administration even if the information is true, according to a survey released by the Social Weather Stations (SWS) on Thursday.

According to the SWS, the non-commissioned survey was conducted from September 12 to 16, 2021, using face-to-face interviews with 1,200 respondents aged 18 years old and above, nationwide — 300 each in Metro Manila, Balance Luzon, the Visayas, and Mindanao.

SWS asked respondents whether or not they agreed with the following statement: “It is dangerous to print or broadcast anything critical of the administration, even if it is the truth.”

In the survey, 45 percent agreed with the statement, 29 percent were undecided, and 19 percent disagreed. 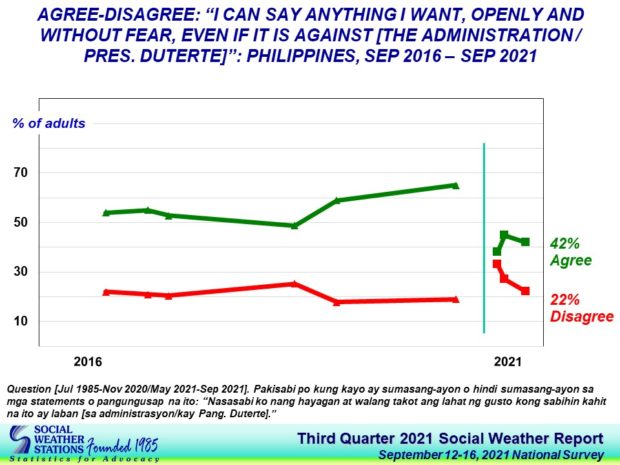 According to the SWS, this gives a net agreement score of +26, classified as “moderate.”

Below are the SWS terminologies for the agreement, according to the poll body.

The net agreement with the statement was highest in the Visayas, which scored +31; followed by Balance Luzon, +28; Mindanao, +23; and lastly, Metro Manila at +17.

Meanwhile, the same survey also asked respondents whether they agreed with the statement: “I can say anything I want, openly and without fear, even if it is against President Duterte.”

Contrary to expectations, an opposite result was seen after 42 percent of the respondents agreed, 28 percent were undecided, and 22 percent disagreed.

The net agreement was highest in Metro Manila at +30; followed by Balance Luzon and the Visayas, both at +19; and Mindanao at +15.

Compared to the June 2021 results, the net agreement rose from moderate to “strong” in Metro Manila, from +22 to +30. As well as in Balance Luzon, although remaining “moderate” as it increased from +15 to +19.

The sampling error margins for the survey were ±3 percent for national percentages and ±6 percent for Metro Manila, Balance Luzon, the Visayas, and Mindanao, said the SWS.

INQUIRER.net is trying to get a comment from Malacañang.

Read Next
English school return spurred COVID in children, but cases fell in adults — study
EDITORS' PICK
Legarda emphasizes role of ICC/IPs in nation building this IP month
Work-From-Home is here to stay and requires reliable logistics
USAID Opportunity 2.0 calls for applicants for grants for out-of-school youth engagement
Oops! DENR clarifies only kids aged 11, below not allowed in dolomite beach
DOTr to defend proposal to increase passenger capacity in public transport
PSA: Fewer births, more deaths logged from Jan-Aug 2021 than same period in 2020
MOST READ
Martires asks why he is being singled out over issues on releasing SALNs
AC Bonifacio’s dance cover of Lisa’s ‘Money’ leaves original choreographer ‘mind blown’
Isko to critics after remarks vs Robredo: I’m sorry, this isn’t about Mr. Congeniality
Bongbong says PH should modernize infrastructure to become Asia’s next logistics hub
Don't miss out on the latest news and information.