Kuwaiti girls use martial arts to counter bullies and violence 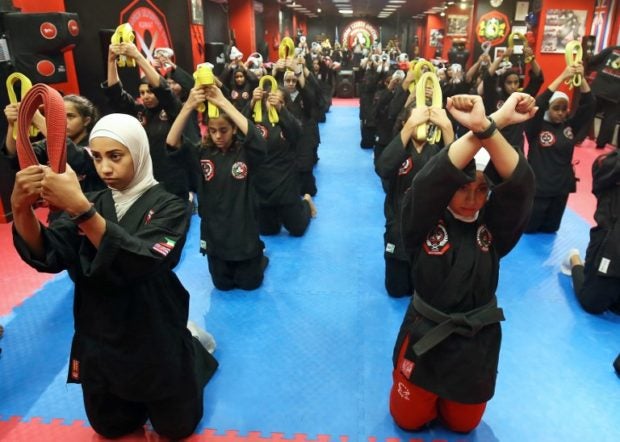 In a small hall in Kuwait City, women and girls in black uniforms gather to learn the basics of self-defense.

On their left sleeves are the flags of Kuwait and the US state of Hawaii, where the hybrid martial art of kajukenbo was developed in the 1940s.

The sport’s name was derived from the various forms of martial arts it includes: karate (KA), judo and jujitsu (JU), kenpo (KEN) and boxing (BO).

Each form teaches techniques that can be used to fend off an attack, says Hasnawi, 33, who stands in class alongside her 12-year-old daughter and other girls.

“I initially wanted to explore this sport, but I continued to practise it to be able to defend myself,” she tells AFP.

Hasnawi still remembers being bullied as a child — something her daughter has struggled with at school too.

But she says Riham has “changed a lot” since they started practising kajukenbo, gaining patience and strength through the sport.

“She has transformed. At school, she used to get really angry and quickly agitated if someone would say something to her,” Hasnawi says.

“Now, it’s something normal that she can (healthily) deal with.”

There is no recent data in Kuwait on cases of violence against women, who enjoy more freedoms than those in neighboring countries.

A 2010 study found that a woman is assaulted a day in Kuwait, according to Ghada al-Ghanem, of the Women’s Cultural and Social Society (WCSS).

The WCSS, whose goal is to help and encourage women’s participation in the Kuwaiti community, has dealt with a number of assault cases and Ghanem believes the actual figure may be higher.

Hung on the red and black walls of the Street Warrior Academy is a poster of two men practising the sport.

“Kajukenbo teaches your child the methods and arts of self-defense,” it reads, complimenting the mottos of “strength and honor” and “street warrior” on the backs of the girls’ uniforms.

The students closely watch their instructor, Faisal al-Gharib, as he explains how to counter an attack with the help of his son.

The girls then pair up to take what they have learnt and put it into practise.

In another instance, the instructor’s son mimics an attack with a wooden knife on one of the more experienced pupils, who wears a black belt.

Already familiar with the exercise, the student explains: “I pretend that I have surrendered… and then I grab his hand on my neck, push it down and move it away.”

More than 120 girls and women between the ages of four and 50 participate in the academy’s different kajukenbo classes, which are held in a room with training weapons lining its walls.

Some 40 men and boys also currently take part in kajukenbo classes at the club on different days from the women.

For Um Saleh, the sport has helped her twin 13-year-old daughters become more independent and decisive.

“It gave them something to focus on other than social media,” she says.

Gharib, the instructor, established the academy in 2014 after learning kajukenbo in the United States. He says he wanted to teach the sport to women back home as a way to stay fit and to defend themselves against any attack.

As part of the training, he presents his students with different scenarios, including assaults and knife attacks.

“We focus on self-defense skills and place the girls in conditions similar to those on the street so we can build their self-confidence and teach them exactly when and where to expect the hit,” Gharib says.

The academy, which has a strict confidentiality policy, has become a safe haven for many girls and women that have been victims of assault or bullying.

It is one of dozens of similar clubs and academies that have opened in Kuwait as kajukenbo gains popularity. Although in the rest of the Gulf, the sport remains relatively unknown.

“Being a (victim) of assault, whether in school or on the street, is what pushed some of these girls and women to pursue the sport,” says Fai al-Fahed, one of the instructors.

“Ultimately, girls are embracing this kind of martial art and we see it boosting their self-confidence.”

Khalida Bashir says she was drawn to kajukenbo after watching clips of the sport online.

“I used to be afraid of everything, but this sport changed me,” she tells AFP.

“I have become more confident and more patient. Some say this is a man’s sport, but that is, in fact, not true.”