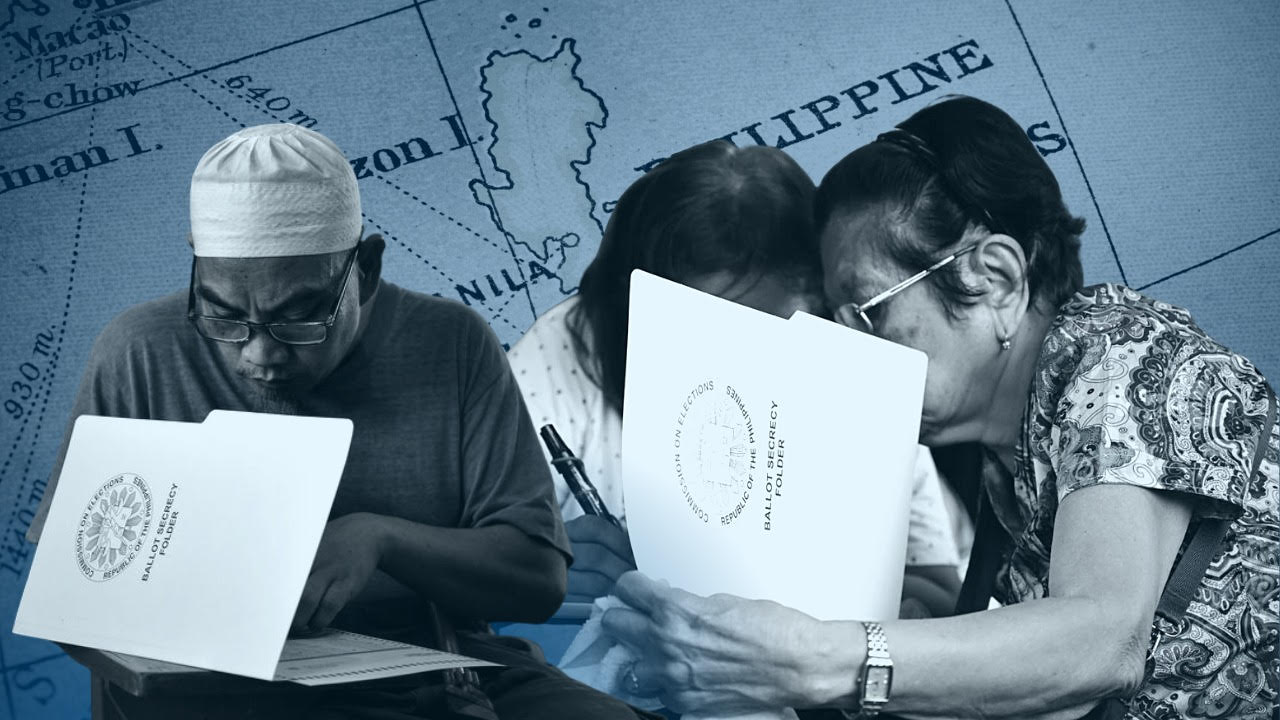 MANILA, Philippines—The 86-day campaign stretch for candidates seeking national elective positions is to start on Tuesday (Feb. 8) but COVID restrictions are redrawing the rules set by the Commission on Elections (Comelec) for candidates to woo voters.

On Nov. 24, 2021, the Comelec issued Resolution No. 10732 which outlined a “new normal” in campaigning because of the continuing threat of COVID virus transmissions.

The National Comelec Campaign Committee (NCCC), which would implement Resolution No. 10732, said last Feb. 4 that all constituted campaign committees in the Philippines will “stand ready” to implement the guidelines.

In 2016, as the campaign stretch commenced, Filipinos saw how candidates for national positions, mainly the presidency and vice presidency, went after the support of voters.

Looking back, Rodrigo Duterte, then Davao City mayor, launched his campaign in Tondo, Manila, a gesture appealing to the C, D and E classes of society as the district is populated mainly by lower middle class to lower classes.

Then Interior Secretary Mar Roxas, who had been endorsed by the late President Benigno Aquino III, launched his campaign in his home province Capiz. Sen. Grace Poe, who ran for president in 2016, launched her campaign in Plaza Miranda, a place rich in history as a venue for political rallies and oratory.

Jejomar Binay, then vice president, launched his presidential campaign at Welfareville in Mandaluyong City while the late Sen. Miriam Defensor Santiago, on her third try for the presidency, launched her campaign in Batac, Ilocos Norte.

In the 2022 elections, however, while physical campaigns would not be prohibited because of the pandemic, the Comelec said risks of COVID transmissions required key changes in campaign rules. 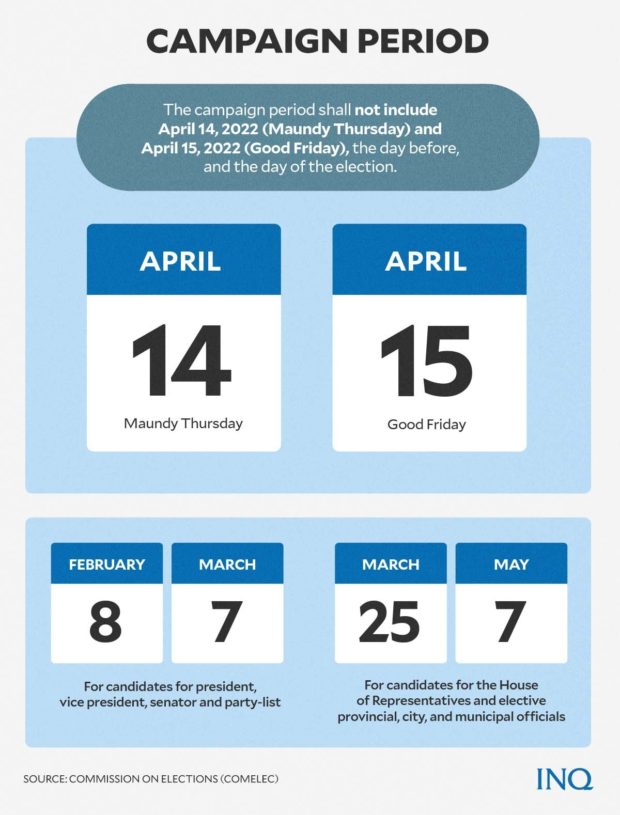 As reflected on the final ballot which the Comelec revealed on Jan. 25, the 2022 elections will have 10 candidates for president, nine for vice president, 64 for senators and 177 party-list groups.

These are higher compared to the number of candidates in the 2016 elections which the Comelec said only had six for president, six for vice president, 50 for senators and 115 for party-list groups.

Vice President Leni Robredo and Sen. Kiko Pangilinan are expected to start their campaign in Naga City while Ferdinand Marcos Jr. and Davao City Mayor Sara Duterte will launch at the Philippine Arena, a 50,000-capacity venue owned by the Iglesia ni Cristo in Bulacan province.

The Comelec, last Feb. 4, reiterated the restrictions on election campaign activities. As election law professor Alberto Agra said, Resolution No. 10732 has “common limitations”: no physical contact, no close proximity and no food and drinks.

Election campaign activities, the Comelec said, are acts designed to promote the “election or defeat” of an individual or individuals to a government office, like these:

Because of the threat of COVID, limitations were based on the new COVID alert level system which the NCCC will consider as category levels for campaign dos and don’ts.

Here are the restrictions:

The Comelec said only candidates, campaign leaders, and supporters belonging to the same household are allowed to be in the same vehicle. 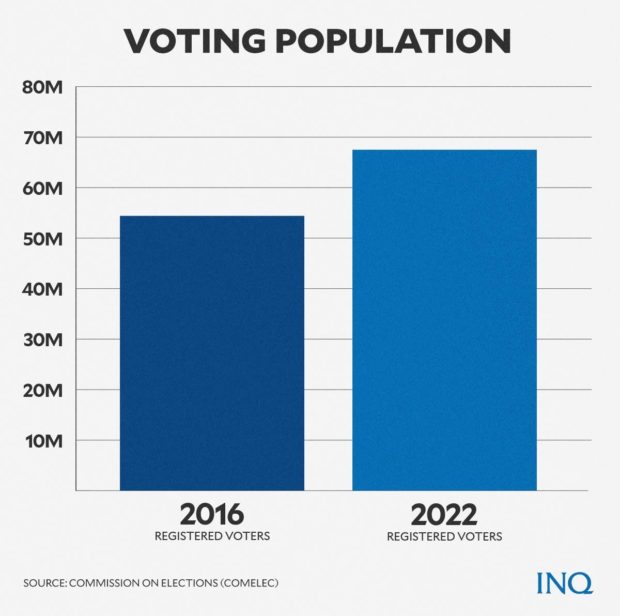 What’s prohibited in all alert levels’?

The Comelec said that in all election campaign activities, the minimum public health standards that were set by the Department of Health (DOH) should be observed “at all times” by everyone.

It said all are mandated to wear full-cover face shields together with face masks (ear loop masks, indigenous, reusable, or do-it-yourself masks, or other facial protective equipment), and observe health protocols.

Any person below 18 years old, those who are over 65 years old, and those with immunodeficiency, existing illnesses, or other health risks, and heavily pregnant women are not allowed to take part in election campaign activities. 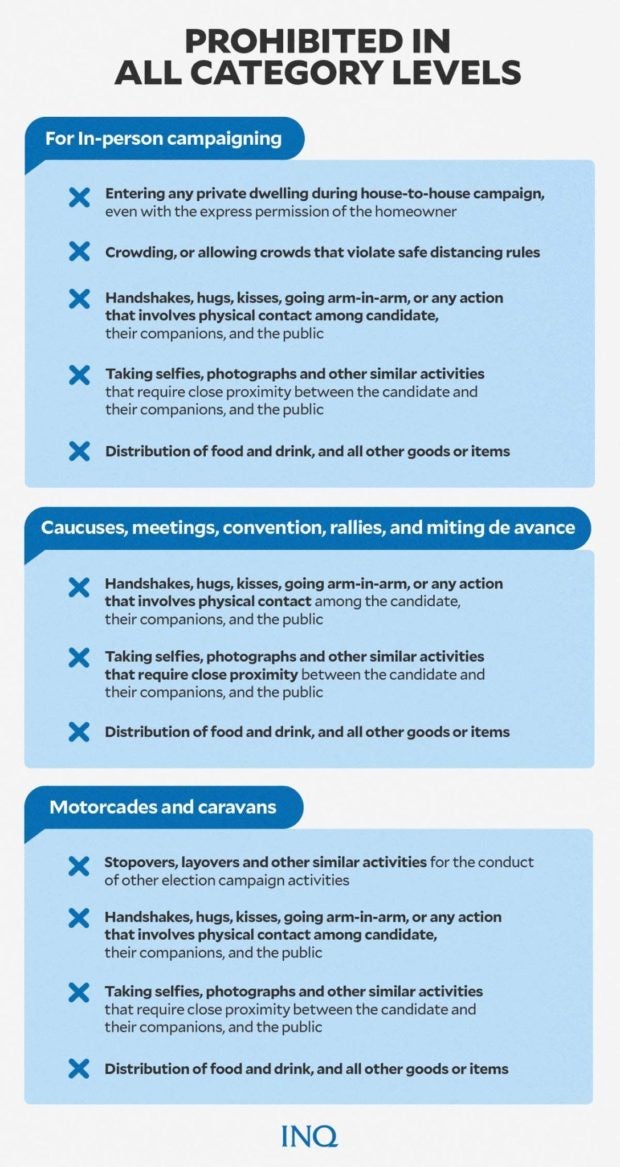 These, however, are subject to the guidelines of the Inter-Agency Task Force on the Management of Emerging Infectious Diseases. Last year, the government said that the wearing of face shields outside of residences is mostly no longer required. 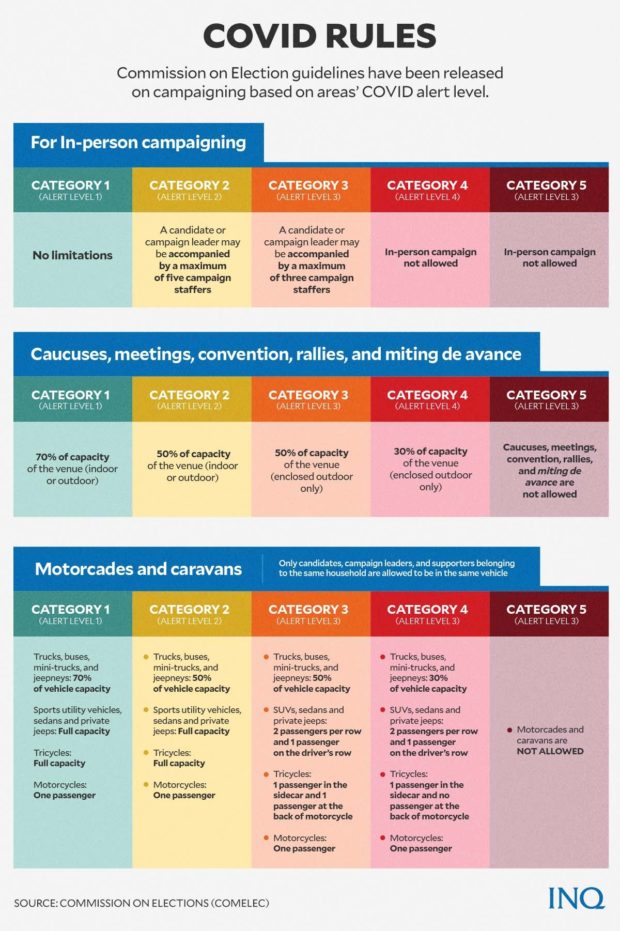 The Comelec said enough air circulation and ventilation should be made certain and that the one-meter rule on physical distancing should be maintained.

These activities, the Comelec said, are “strictly prohibited” in all category levels:

The Comelec said anyone who violates these rules and other provisions of the Omnibus Election Code face penalties of one to six years in prison without probation and perpetual disqualification from holding public office and removal of the right to vote.

“If he or she is a foreigner, he or she shall be sentenced to deportation which shall be enforced after the prison term has been served,” the Comelec said.

Any political coalition found guilty shall be sentenced to pay a fine of not less than P10,000, which shall be imposed upon the coalition after criminal action has been instituted in which coalition officials have been found guilty.

The Comelec said the DOH or its local counterparts, as members of the NCCC, shall closely monitor the compliance of all concerned with the health and safety protocols, and shall, with knowledge of the NCCC, take action.

The law provides that “non-cooperation of persons and entities that should report and/or respond to notifiable diseases or health events of public concern” is a criminal offense.

A person may likewise be held liable under several other related laws.