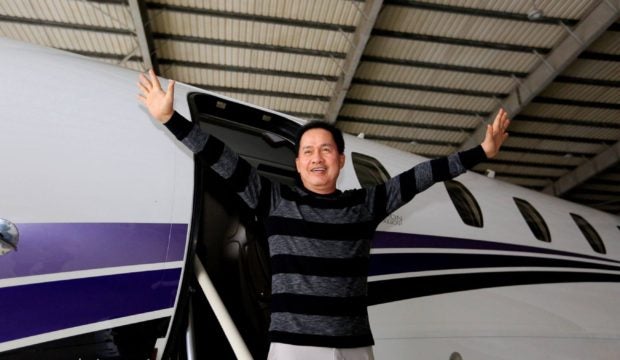 Its chief, Secretary Menardo Guevarra, said this on Monday in the wake of Quiboloy’s inclusion in the FBI’s “most wanted” list.

An ILBO directs the Bureau of Immigration to be on the lookout for a subject and to verify the status of a case against the person. It does not restrict an individual from leaving the country.

ILBO is different from a hold departure order or HDO, which is issued by a court.

“We can issue an ILBO motu proprio. Urgency is the key factor. We’ll play it by ear as we examine the evidence before us and as outside events unfold,” Guevarra told reporters on Monday.

Guevarra said the DOJ is currently studying and reviewing an appeal for a local case filed against the self-proclaimed “Appointed Son of God.” The case involves a woman who accused Quiboloy of raping her in 2014. The woman filed rape, child abuse, and human trafficking complaints against Quiboloy and five other members of his church in 2019.

But the case was dismissed by the Davao City prosecutor, according to the DOJ chief, although the woman filed an appeal before his department.

Guevarra said the DOJ will “sooner or later” release a resolution whether it would deny the appeal or reverse the ruling of the local prosecutor.

Should the DOJ reverse the ruling, a local case would be lodged against Quiboloy and his counsel could use this to stall the extradition proceedings.

However, Guevarra said that despite the existence of a local case, Quiboloy can still be extradited based on the communication and coordination of the United States and the Philippines.

(It will depend on the communication of the two countries if the person of interest would be turned over in the meantime to the foreign government so that this Filipino may be tried in the US court.)

The Department of Foreign Affairs (DFA) should determine whether the extradition request for Quiboloy is covered by the treaty between the US and the Philippines, Guevarra noted.

Among the criteria by which the agency will determine this is whether the charges filed against Quiboloy are punishable in both states, known as the “dual criminality,” and if the penalty is more than one year.

“They have to determine kung itong (if this) request na ito ay (is) properly covered by the treaty between the US and the Philippines. Dapat ‘yung offense is something that is punishable in both the requesting state and in the sending state,” he said.

(The offense should be punishable in both the requesting state and in the sending state.)

(They have to determine if the offense carries a penalty of more than one year. If it is only for a few months, this won’t be covered by the extradition treaty.)

The US government must also submit the complete requirements to the DFA.

If the DFA determines that the extradition request complies with the country’s laws as well as the treaty, it would then endorse it to the DOJ.

“So that the DOJ, the central authority can now actually initiate the process or filing of the petition of the extradition,” Guevarra said.

The DOJ chief, however, said there is no extradition request yet from the US government for Quiboloy.

READ: No extradition request yet from US gov’t for Quiboloy, says DOJ