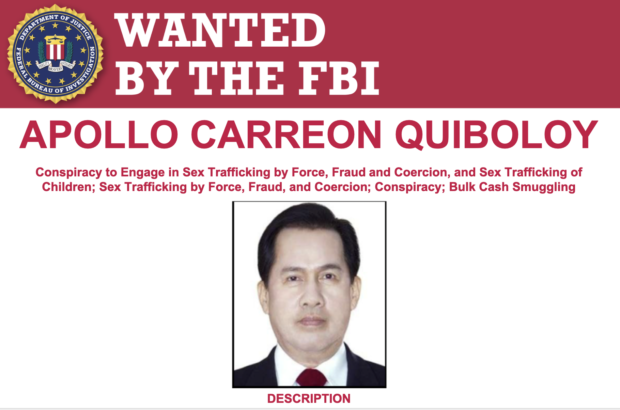 A portion of the FBI’s Wanted poster for Pastor Apollo Quiboloy. Image from the FBI website.

MANILA, Philippines — After indicting him and several others for sex trafficking, the United States Federal Bureau of Investigation (FBI) said Pastor Apollo Quiboloy of the Kingdom of Jesus Christ (KOJC) Church and two other cohorts are now “wanted” individuals in the US.

“If you have any information concerning this person, please contact your local FBI office or the nearest American Embassy or Consulate. Field Office: Los Angeles,” it further read.

INQUIRER.net has sought Quiboloy’s reaction, but his camp has yet to reply as of posting.

Aside from Quiboloy, two others were also wanted by the FBI following their indictment by US prosecutors: Teresita Tolibas Dandan and Felina Salinas, two of his key associates at KOJC.

According to the FBI, Quiboloy’s alleged participation in a labor trafficking scheme involved bringing church members to the United States, via fraudulently obtained visas, and forcing them to solicit donations for a bogus charity, donations that actually were used to finance church operations and the lavish lifestyles of its leaders.

Members who proved successful at soliciting for the church allegedly were forced to enter into sham marriages or obtain fraudulent student visas to continue soliciting in the US year-round, it further said.

Furthermore, it is alleged that some females were recruited to work as personal assistants, or “pastorals,” for Quiboloy and that victims prepared his meals, cleaned his residences, gave him massages and were required to have sex with Quiboloy in what the pastorals called “night duty.”

Quiboloy, a self-proclaimed “Owner of the Universe” and “Appointed Son of God”, is an influential evangelist is followed by millions of Filipinos, such that some politicians often seek his blessing and endorsement.

He is also known to dish out warnings of doom against those who supposedly cause him harm.

Recently, he warned that the world will suffer a fate “much worse than the Omicron virus” if he is continuously “hurt and persecuted,” calling his indictment by US authorities the “biggest assault and fire of persecution” that “maligned” his reputation.

“Various variant of the COVID-19 is only an introduction. If you keep hurting, persecuting and harming the appointed son in the kingdom, you will see much worse than the Omicron virus,” he told his followers.

“You might see in the future, people walking their flesh rotting away, but they’re still alive. Flesh eating bacterias that are immune to any vaccine will come and destroy the inhabitants of the earth,” he added.