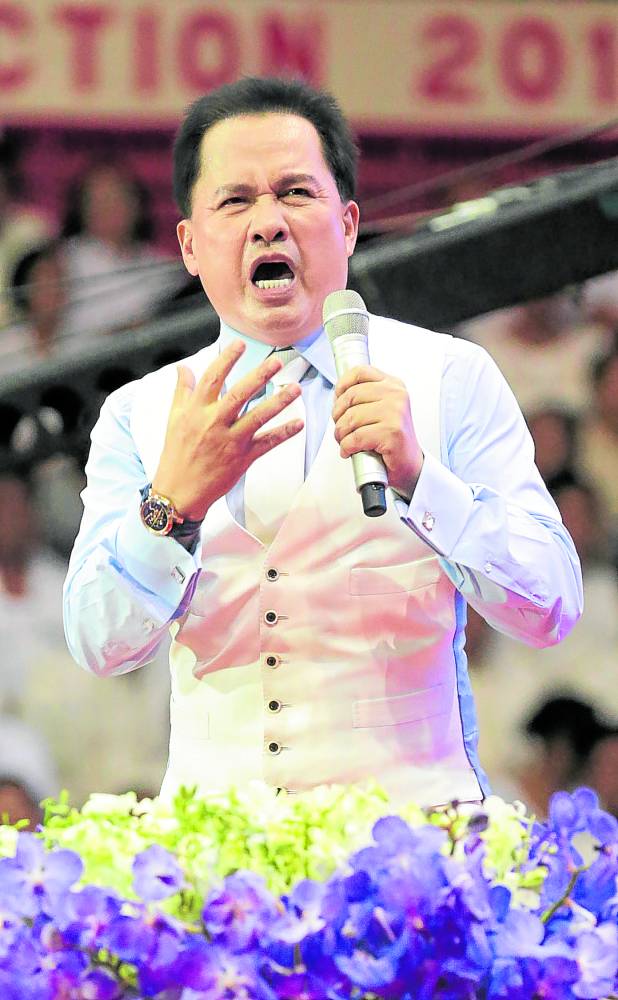 MANILA, Philippines — President Rodrigo Duterte’s spiritual adviser Pastor Apollo Quiboloy of the Kingdom of Jesus Christ church, who styled himself as the “appointed son of God,” warned that the world will suffer a fate “much worse than the Omicron virus” if he is continuously “hurt and persecuted.”

Quiboloy, who is facing a number of sex crimes and other charges in the United States in connection with his position in his church, said during his Sunday worship service in Davao City that a “flesh-eating bacteria immune to any vaccine” will descend upon his alleged persecutors.

“Various variant of the COVID-19 is only an introduction. If you keep hurting, persecuting and harming the appointed son in the kingdom, you will see much worse than the Omicron virus,” he told his followers.

“You might see in the future, people walking their flesh rotting away, but they’re still alive. Flesh eating bacterias that are immune to any vaccine will come and destroy the inhabitants of the earth,” he added.

At the same time, the sect leader assailed the sex charges filed against him by US authorities, calling it the “biggest assault and fire of persecution” that “maligned” his reputation.

In the complaint against him, Quiboloy allegedly used his influence as religious chief to entice or coerce girls and young women to have sex with him during what they termed as “night duties”.

But Quiboloy belied the allegations, and admonished his “persecutors” of receiving a far worse judgment for “the way you treat the appointed son.”

“The day of the Lord is here—do not ever ever play a joke, or continue to pursue the persecution of the appointed son because the Father in heaven has already declared through the appointed son. No one can escape this,” Quiboloy said.

“The way you treat the appointed son of God here is the way the world is going to receive its judgment… You want this to stop? Stop persecuting, prosecuting, maligning and falsely accusing the appointed son. If you continue to that, the world will suffer,” he added.

Quiboloy’s threat of a flesh-eating bacteria is not the first time that he claimed to have power over the forces of nature.

In November 2019, Quiboloy famously declared that people should thank him for stopping the continuing reverberations of the 6.6-magnitude earthquake that rocked North Cotabato and nearby provinces. The powerful tremblor left at least 8 people dead and nearly 400 others injured.

In a video shared by YouTube user Vergel Cabero, the televangelist said he “yelled” at the quake to stop – and it did.

“Noong lumindol ng 6.6 (magnitude), nandoon ako kahapon, nandoon ako sa kwarto ko, sabi ko, ‘Lindol, stop. Umi-stop’ (When the 6.6-magnitude quake hit, I was in my room, and I told it stop, and it did),” Quiboloy said in the video that had since gone viral.

“Pasalamat kayo sa akin kasi kung hindi ko pina-stop ‘yun, marami kayong magigiba diyan, mamamatay kayo (You should thank me for stopping the earthquake because otherwise many of you will be dead),” he added.

However, when Typhoon Tisoy ripped across the country in December of the same year, Quiboloy claimed that he chose not to stop it in its track after he was criticized and ridiculed for his previous claim that he has ordered a stop to the deadly Mindanao earthquakes.