Bongbong Marcos: Election is the best process vs political dynasties 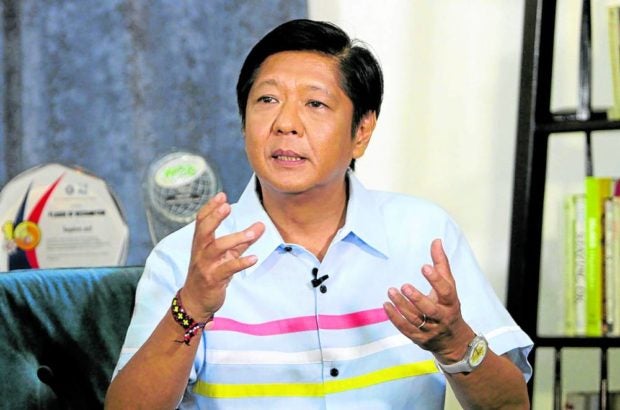 MANILA, Philippines — Presidential aspirant and former Senator Ferdinand “Bongbong” Marcos Jr. said Saturday that he believes that the election is still the “best form of anti-political dynasty process,” as he questioned why certain individuals should be banned from seeking an elective government position because their family members are in politics.

(We have a good anti-political dynasty rule called the elections, and if people don’t want political families to lead, they will eventually be removed from power.)

(I think the election is the best form of anti-dynasty process. The problem with banning political dynasties is how would you tell a person that he cannot run because of his name?)

Marcos, son of the late dictator Ferdinand Marcos and whose family has many members involved in politics, said that anybody should be allowed to run for an elective post, noting that even the children of some politicians can be excellent public servants.

He also described efforts to prohibit political dynasties as a “slippery slope.”

(I think that is a slippery slope. If you will start prohibiting it, we may do the same for those with the same name, those who are neighbors, or friends. Where do we draw the line? That will be the problem.)

The former senator also noted that political dynasties should first be defined by law.

“First define to me what a political dynasty is. Maraming galing sa isang pamilya ay nasa isang (There are many people from the same family in an) elective position or appointed positions,” he said.

The 1987 Constitution indicates that “the State shall guarantee equal access to opportunities for public service and prohibit political dynasties as may be defined by law.” However, no enabling law has been passed defining political dynasties.

Political dynasties ‘not bad’ and are here to stay – Duterte