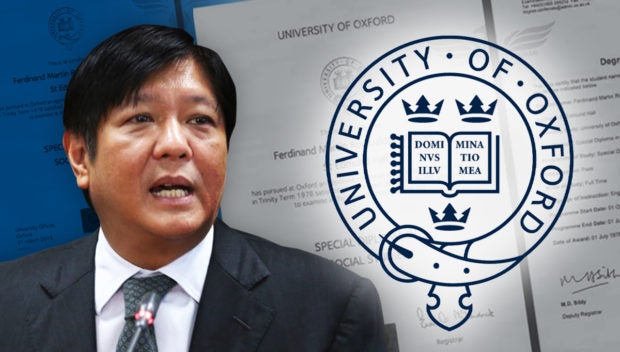 FILE Former Senator Bongbong Marcos claims that he received a full diploma from the University of Oxford.

MANILA, Philippines — Presidential aspirant and former Senator Ferdinand “Bongbong” Marcos Jr. on Saturday insisted that he obtained a degree from the University of Oxford.

(Well, I already showed my diploma. It is a degree course. So yeah, I graduated from Oxford.)

In a statement in October last year, Marcos’ chief of staff and spokesperson Atty. Victor Rodriguez also said that their camp “stands by the Degree confirmation which was issued by the University of Oxford” for Marcos.

“It is up to anyone to question or challenge this with the said university if they so please,” said Rodriguez, who maintained that the Marcos camp never misrepresented the former lawmaker’s Oxford education.

In the same month last year, Oxford Philippines Society, a group of Filipino students and alumni of Oxford, said that Marcos did not obtain a degree from the university.