Marcos Jr’s ‘special diploma’ from Oxford: You can have it, too | Inquirer News
Close
menu
search

The Marcos camp has been consistent with its claim that Ferdinand Marcos Jr, son of the late dictator Ferdinand Marcos, was an Oxford “graduate” since he matriculated in one of the world’s oldest and most prestigious universities in 1975.

But being issued a certificate or, as Marcos Jr. claims, a diploma does not mean one is a graduate or has finished a BA degree. Marcos followers and PR team even compared him to famous dropouts like Bill Gates and Mark Zuckerberg. But these personalities were ordinary students during their time, unlike Marcos Jr.

On Facebook, which has become notorious for falsehoods, people are debating the authenticity of the special diploma that Marcos Jr. presented.

Among those who doubted the signatures on the supposed diploma presented by Marcos Jr. was Ruston Banal, an image analysis expert working with International Photography Awards (IPA), a New York-based organization.

Banal’s organization verifies the authenticity of thousands of images being submitted to photography competitions.

“I had doubts. So, I sent messages to the signatories of the special diploma, to know if they are real persons”, Banal said in a phone interview.

Special Diploma is not a degree

Last Oct. 24, Banal received an email from Professor Ewan McKendrick. In the e-mail, Prof. McKendrick wrote that: “I have now retired from the University of Oxford and so am no longer in a position to be able to help you with your inquiry.” 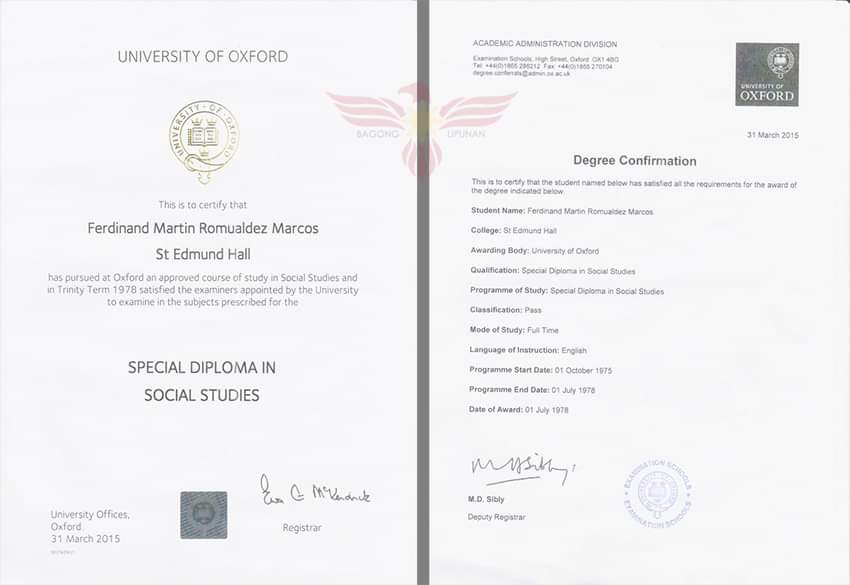 After streams of e-mails, Banal finally received confirmation from Cathy King, the private secretary to the registrar of the University of Oxford.

“We can confirm that a Ferdinand Marcos matriculated at the University of Oxford in 1975 to read for a BA in Philosophy, Philosophy and Economics,” King wrote. “According to our records, he did not complete his degree but was awarded a special diploma in social studies in 1978.”

Declassified files sent to the late dictator also showed that his son failed miserably at Oxford.

Marcos Jr. did not pass preliminary exams in his first year of study. A letter dated Nov. 10, 1975 to Fr. Dominic of St. Edmund Hall by Fr. Gainsford, the headmaster, said “he (Marcos Jr.) did not come up to scratch in his A-level mathematics.” It meant he failed twice and got Ds. These files are available at Kasarinlan, Philippine Journal of Third World Studies (https://www.journals.upd.edu.ph/index.php/kasarinlan/article/view/5899).

What then is a special diploma?

In another e-mail forwarded to Inquirer.net by the Information Compliance Team (ICT), Assurance Directorate University of Oxford, the special diploma was defined as something available to undergraduates and graduates.

A special diploma is comparable to any online course available on the internet.

“If you finish a certain online course offering, it does not mean you are not automatically a graduate, for example, of MIT. It was just like a workshop. Non-credit units,” Banal explained.